While news leaked out early about the new expansion, official word came today from SWTOR.com. As always, we’re here to bring you updates as we see them  and we were anxiously awaiting the trailer (scroll down to see for yourself).

We are happy to announce our brand new digital expansion: Knights of the Fallen Empire! 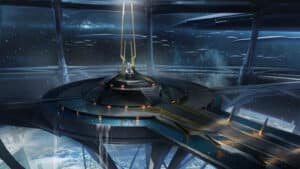 Knights of the Fallen Empire marks a renewed focus on BioWare-style cinematic storytelling in Star Wars™: The Old Republic™. Your character will become the Outlander, a veteran of the Great Galactic War who comes face-to-face with a new threat to the galaxy: the Emperor of the Eternal Throne.

This expansion also raises the Level cap to 65, and includes the option to create a Level 60 character! This allows you to start fresh in Knights of the Fallen Empire and jump right into the new story content. We are also delivering this story content in a way never before done in Star Wars: The Old Republic: Chapters. The first nine Chapters will be available at launch on October 27th, with new Chapters delivered regularly following that.

With the launch of Knights of the Fallen Empire, all of the original eight Class stories will be enhanced, allowing for a faster and more engaging playthrough for new and veteran players. Additionally, many of our existing Flashpoints and Operations are being scaled to 60+, giving you many more Elder Game options at Level 65.

All Subscribers will received the digital expansion for free. We are also excited to announce the Knights of the Fallen Empire Rewards Program. Between today and October 19th, Subscribers can earn collectible rewards for each month that they maintain their Subscriber status. This reward program is in addition to the fact that ALL subscribers receive Knights of the Fallen Empire for free! To learn more about the Rewards Program and the digital expansion, please visit www.StarWarsTheOldRepublic.com/fallen-empire.

We look forward to bringing you this exciting new chapter for Star Wars: The Old Republic!

And of course, out of E3 today we saw the big reveal of the highly anticipated trailer:

Stay tuned for updates and answered questions on the new expansion, as well as more exciting news and recaps coming out of E3 today!