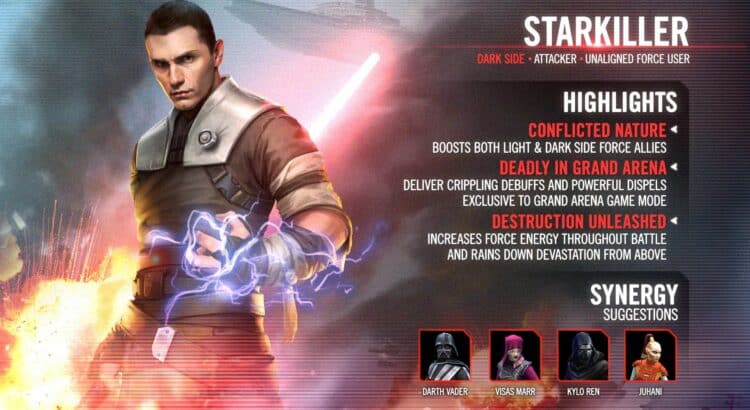 The guys over at Capital Games has posted a new developer insight. This time they are talking with the designers of The final unit of our Lucasfilm 50th Anniversary character – Starkiller. He has landed on the holotables with the force of a Star Destroyer being yanked from the sky!

Below, we take a dive into the motivations and inspirations our developers drew from while creating the kit for this fan-favorite Star Wars: The Force Unleashed character.

For more info and insights from the devs on this character, check out this interview with CubsFan Han:

FINAL TEXT (OMICRON): Deal Physical damage to target enemy and inflict Daze and Vulnerable for 2 turns, which can’t be resisted. Gain 25 stacks of Force Energy. This ability can’t be evaded.

Unleashed: Inflict Buff Immunity and Healing Immunity for 2 turns, which can’t be resisted

While in Grand Arenas: While Unleashed, dispel all debuffs on all allies, and the Buff Immunity and Healing Immunity can’t be copied, dispelled, or resisted.

FINAL TEXT (OMICRON): Dispel all buffs on target enemy and deal Physical damage to all enemies, which can’t be evaded. This attack deals 5% more damage for each buff dispelled.

Unleashed: Deal 25% more damage for each buff dispelled instead

While in Grand Arenas: Dispel all buffs on all enemies.

FINAL TEXT: Limit one use per battle.
Deal damage equal to 80% of Starkiller’s Max Health to all enemies and Stun them for 1 turn, which can’t be resisted. Allies recover 100% Health and Protection. If this attack defeats an enemy, Starkiller takes a bonus turn. This ability can’t be evaded.

Force Energy: At 100 stacks, lose all stacks and gain Unleashed

Size Means Nothing: Limit one use per battle.

Deal damage equal to 80% of Starkiller’s Max Health to all enemies and Stun them for 1 turn, which can’t be resisted. All allies recover 100% Health and Protection. If this ability defeats an enemy, Starkiller takes a bonus turn. This ability can’t be evaded.

Unique 2: THERE IS MUCH CONFLICT IN YOU
FINAL TEXT (OMICRON): At the start of battle, if there are no Galactic Legend allies and Starkiller has exactly one Jedi, one Light Side Unaligned Force User, one Sith, and one other Dark Side Unaligned Force user ally, all allies gain the following bonuses:

While in Grand Arenas: If the conditions for this ability were met at the start of battle, all of the following bonuses are also gained: