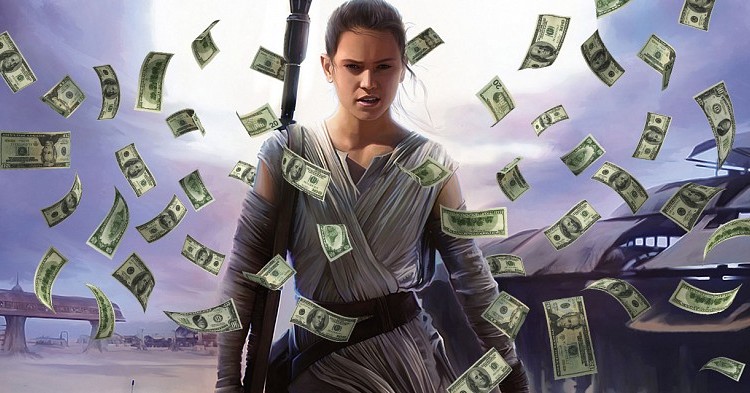 Disney said last Sunday that its blockbuster  hit Star Wars: The Force Awakens broke the $1 billion mark around the world faster than any other film in history. It broke the previous record holder, “Jurassic World” by one day, earning $1 billion in just 12 days. It had the biggest Christmas day at the box office, and the biggest second weekend at $153.5 million. After just 10 days, it has become the fifth biggest film in U.S. box office history.

It’s really not a surprise to anyone that this film is setting records already, is it? I mean, it doesn’t take a genius to predict that, with the popularity of the Star Wars franchise, the hype leading up to this premiere and the sheer excitement from fans across the globe, this was going to be a hit. It was also a good sign when the first tickets went on sale and crashed online ticket sellers like Fandago as everyone tried to be first to get their hands on some tickets to “The Force Awakens”“.

“You almost have to rewrite all the record books for this movie,” box office analyst Paul Dergarabedian of Rentrak said. “It’s absolutely mind-blowing that ‘Star Wars’ could get to a billion dollars in 12 days and it hasn’t even opened in China, the second biggest movie market in the world.””

The movie continues to break records as it is now set to take the domestic crown. It’s has brought in another $200M in one week, bringing the domestic total up to around $743M. It has the highest third weekend gross of $90M, beating the previous record holder, Avatar, which grossed $68.5M in 2010 in its 3rd week.

It’s also the fastest film to reach $700M in the box office. It made this goal in 16 days, where Avatar took 72 days.

The movie has been setting records since its release on December 17th and that’s not likely to change any time soon. So whether you were part of the $1B, or still trying to avoid spoilers until you can see it for yourself, Star Wars is here to stay and it’s taking the world by storm!