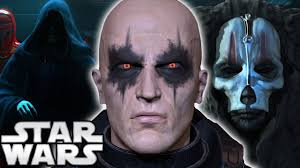 There have been many powerful Sith in Star Wars lore. There’s Darth Bane, Darth Maul, and the very popular Darth Vader. There was also Exar Kun and Marka Ragnos (who ruled for over 100 years). Then we also don’t want to forget Lord Vitiate or Darth Sidious. How do you even begin to put all that dark evilness into a list? Whether you are a full-fledged fan of the Dark Side, or someone who leans toward the Light, you still have to give credit where it’s due when it comes to these amazing, powerful Dark Lords. It’s hard to compete with the likes of bad guys who can destroy entire planets with just their minds. Also, they wear capes. How cool is that?

This video from Star Wars Theory covers from of the most powerful Sith Lords (as listed below) and a brief history of how they came to be. This is a great way to recap all of your favorite Sith Lords, or even learn a little more about some you might not be as familiar with. So go ahead and give it a watch and then let us know if your favorite made the list. Who would you like to see covered next?

In the Star Wars Universe, there were many Sith Lords, in this video we will cover a brief history of 7 of the most powerful while covering the next 7 in another video.
Write your requests below to get them covered in the next video 🙂

Who is your favorite?