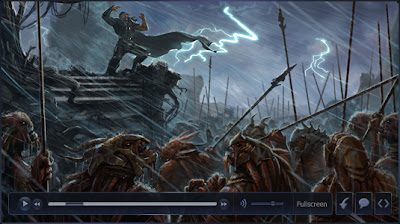 The tenth Timeline update, revealed by BioWare today, looks at the history of Exar Kun, his fall to the dark side and how he was defeated. Not long ago we had our own “Know your lore” update about Exar Kun and yesterday we wrote about his apprentice Ulic Qel-Droma Here’s the official Bioweare update, and below you will find the timeline video:

The stories of Exar Kun’s fall to the dark side and his campaign of destruction against the Republic have been told as warnings to Jedi Padawans for generations. After witnessing the return of the Sith Empire, Master Gnost-Dural has realized a new relevance to Exar Kun’s role in history.

BTC 347 – Decades before the outbreak of the Mandalorian Wars, a promising Jedi named Exar Kun began exploring the secrets of the Force. Despite the warnings of his Masters, Kun didn’t hesitate to experiment with the dark powers of the ancient Sith. After being confronted by the spirit of the fallen Sith Lord Freedon Nadd, Exar Kun harnessed the power of the Sith Temples on Yavin 4 and embarked on a campaign to destroy the Republic and the Jedi Order. After aligning with the Krath Cult and fellow fallen Jedi Ulic Qel-Droma, Exar Kun’s armies managed to destroy the Jedi library on Ossus, but that was to be his final victory before being betrayed and defeated. Centuries later, the Jedi have learned that Exar Kun’s campaign took place even while the ancient Sith Empire remained in exile on Dromund Kaas. Jedi Master Gnost-Dural now asks, if Exar Kun’s rise to power was encouraged by the spirits of the ancient Sith, what might this suggest about their support for the resurrected Sith Empire?

Interesting thought from Master Gnost-Dural there that the spirits of the ancient Sith Lords might not support the Sith Emperor. He could be right. Or he could be wrong and the spirits were playing a long game that’s much deeper than the Jedi master could see through. Or perhaps the Sith spirits don’t really care who becomes Dark Lord of the Sith and are justas happy to back one as the other; as long as a Sith Lord ends up ruling.

What’s also interesting is how often Yavin 4 has been mentioned now in various official SWTOR sources. At this point it would be really surprising if the planet is not included in SWTOR as a playable planet (perhaps one for high-level raid dungeons as it’s sure stressed often enough how powerful and dangerous the various creatures on the moon are). After all, what’s really the point of this update if it doesn’t somehow come back in the game?