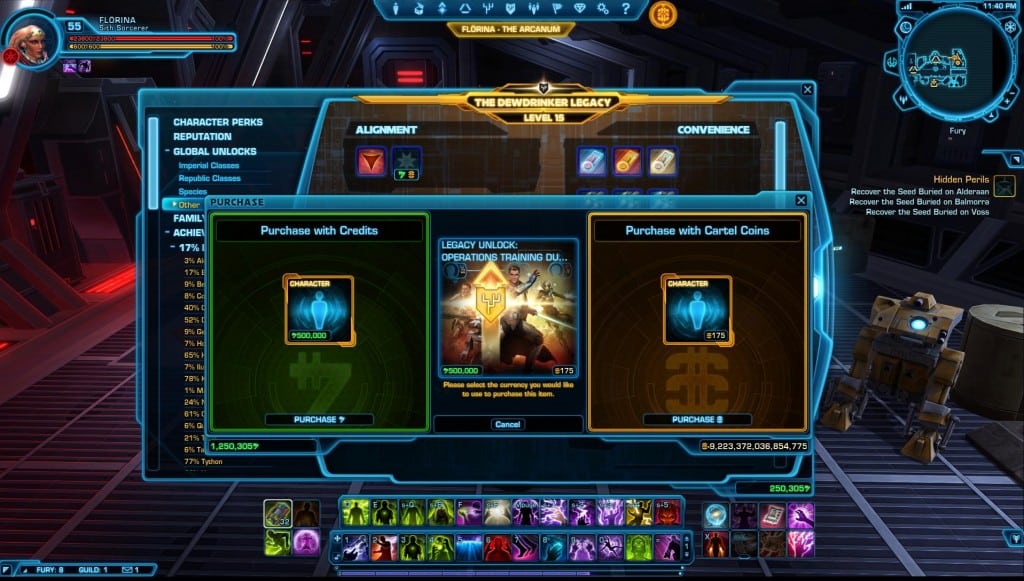 With a new game update comes new bugs. Here a Consolidated Bugs List of all the know bugs in the game right now. If you have found any that is not on this list, remember to report it to BioWare, either ingame or on the official forums.

QUOTE
Death_By_Smiley
The Nightmare Buff removed the increased damage. It however did not remove the extra HP.

Frankly, I’d almost prefer it would stay this way. However, this is, by definition, and oversight, as the nightmare buff was supposed to affect HP.

I’ll send this along to the team to see what’s going on. Thanks!

QUOTE PavSalco
At least in the preview my beard goes through Ajunta’s mask that does not hide it at all. Can any person that equipped the mask confirm this?

Thanks for letting me know. I’ll have someone look at it.

While you did a great job at fixing force lift/whirlwind not being broken through the guard damage, it seems that you’re not there quite just yet. Haunted Dreams/Containment perks for the Madness/Balance skill trees are supposed to make Force Lift/Whirlwind skills to add 2 seconds hard stun upon being broken early from damage. As it is now, there is no such effect and the target is instantly out of a control effect upon taking damage. Please look into this at your earliest convenience and make all the madness/balance players much happier than they are now. Thank you!

Thanks for letting me know – I’ll pass it along.

QUOTE
Flying-Brian
There is a bug on the Kingpin’s Blaster Pistol.

The laser sight on the pistol, which displays the color of the color crystal used, is not working. The bug is there when previewed or when it is equiped.

When the event was on the PTS, the laser sight was visable and the color would change depending on the crystal used.

With the pain in the butt the cirtificates are to win, and the credit sink involed with it, please fix this.

I’ve sent this along to the team. Thanks!

QUOTE
phalczen
Mnek, the prototype material vendor on the republic fleet in the cartel bazaar, part of the new system for exchanging material currency from cartel packs for resources, has in stock prototype materials that are NOT USED in game and are left over from the beta for rise of the hutt cartel. Example: impeccable orange crystals, a grade 9 gemstone that is not used in any schematic. Furthermore, Mnek the prototype vendor lacks a resource that is used, namely, perfect upari crystals, which are used to make gormakk crystal alpha wave inhibitors, one of the few consumables that artificers can make and still earn money on. Finally, the artifact vendor is missing the grade 9 sliced tech part, Thermal Regulators. It has every other artifact sliced tech part except the grade 9s.

I’m sure this has been reported before but I’m posting it here for comment.

Thanks for the post! I’ll have someone take a look.

This is something we are aware of and looking into – thanks!

The color, on the other hand, is working as intended. It is mentioned in the tooltip in the Cartel Market that it retains its original color. Sorry for any confusion!

QUOTE
Eraan
Expert Fighter Battle Harness has pretty serious texture bug that is visible in item preview window and in conversations/cinematics. Large part of cloth looks like skin instead of textile. Every body type, race and gender has this issue

Thanks for the post and the picture! I’ll send it to the right folks.

QUOTE
Seraphaim
The last 2 games of GSF i logged into spawned everyone at the center of the map where we all proceded to self destruct without the option to respawn or the respawn points even showing up on the map.

I’ll see what I can find out. Thanks!

QUOTE
Sacrilage
Good afternoon. This morning I saw and tried Cyborg Construct RH-6 headgear in the promptness with Gold Scalene Chestguard. On the fitting screen, the image of the character, on the character selection screen, everything looks just fine. As it should look like. But in the game, on all planets, in all colors in objects, everything looks different and very ugly.

How looks like on the character selection screen
http://min.us/i/KAnSMpVDK1Ib

That’s how it looks during the fitting to the character
http://min.us/i/uldSxlAjSj21

That’s how it looks in the game (BUG)
http://min.us/i/gAFdXjEAEUuT

Please fix it as fast as you can

I’ll make sure the team is aware if they aren’t already. Thanks!

QUOTE
Eraan
Nimble Brawler’s Chestguard female body type 2 version has annoying issue in collar near chin. You can see spike coming out of it when character moves her head. It will also move weirdly when character talks.

Thanks! I’ll make sure the team knows.

These are symptoms of an issue that we are currently looking into that occurred at the launch of 2.8. You can find the main thread here. Thanks for your post and keep an eye on the main thread for updates!

Hey! Thanks for your post. These are symptoms of an issue that we are currently looking into that occurred at the launch of 2.8. You can find the main thread here.

Hey! Thanks for your post. These are symptoms of an issue that we are currently looking into that occurred at the launch of 2.8. You can find the main thread here.

I spoke with the combat team regarding this, and this is working as designed. Accuracy affects anything you attempt to do to a hostile target whether damage is being done or not. The only exceptions to this rule are abilities that taunt, which cannot be resisted per their tooltips.