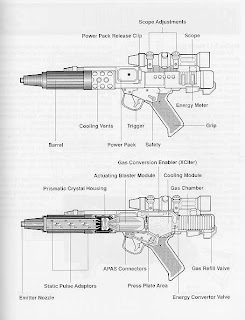 Much of the following technical info is taken directly from Del Rey publisher’s “Essential Guide” series, and I highly recommend them to any fan looking for more.

Blasters
A blaster was a ranged weapon that fired bursts of particle beam energy called blaster bolts from a replaceable power cell. The most commonly used weapon in the galaxy, blasters’ intense beams consisting of compacted high-energy particles and intense light could kill or paralyze their target, depending on their setting. Blasters ranged from compact pistols, all the way up to large, heavy rifles and starship-mounted blaster cannons.

The oldest known type of blaster was used by an ancient droid of an unknown model employed by the Rakatan Infinite Empire. This weapon was considered to be extremely up-to-date compared to the blasters of the year 3,956 BBY.

Technical information
The term blaster was often used interchangeably with the term laser in everyday conversation, both denoting the same type of particle beam weapon. However, strictly speaking, the laser was a much older weapon design than the blaster. And, unlike those of lasers, blasters’ firing cycles had more proficient recharge rates, allowing them to be capable of attaining much higher rate of fire, though at a loss of distance and accuracy.

There is also some dispute as to what size restrictions denote a “blaster”. For example, blasters are commonly thought of as handheld weapons only, but starship-mounted blaster cannons may fall in this category as well.

Laser mechanics
A laser beam was a coherent shaft of light. When referring to light (or any other wave pattern for that matter), coherence refers to the pattern’s “sameness” in multiple waves. In other words, each light wave emitted from the laser device had the same wavelength and amplitude as all other waves emitted from the same device, and all “crests” and “troughs” of every wave were aligned with the others.

Lasers were generated by introducing energy to a medium, the substance used to generate the beams. Tibanna gas was a frequently favored medium. When an atom of the medium was excited by energy, one or more of its electrons would “jump” to a higher energy level. When the atom stabilized (the point at which the electrons return to their original energy levels), a photon was released. A photon was a “packet” of energy that traveled in both a wave-like and a particulate manner, giving it a high energy level, as well as a high damage rating. Some types of sniper rifles fired invisible bolts of energy by using a special type of blaster gas. This weapon was very useful for acting from concealment, especially if the user were wearing a portable stealth field generator or sound dampener. 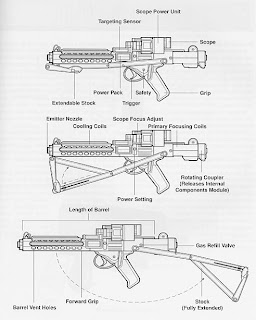 Blaster mechanics
Blasters were a considerable improvement over the archaic laser design. Instead of a coherent beam of light and heat like a simple laser, the blaster fired a highly compressed, focused high-energy particle beam that was very deadly to most creatures. The energy that made up the blaster bolt depended on the type of blaster being used.

The less common blaster was a plasma based design, like those used by the Grand Army of the Republic. Plasma-based blasters were effective against all targets, but even more so against droids because of the nature of plasma as a superheated, ionized gas. Droids were weak against ion energy, so they were a natural choice against a droid army. . 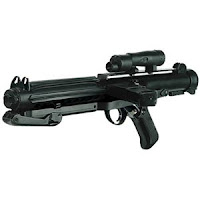 In plasma-based blasters, a high-energy gas (tibanna gas, for example, used in the BlasTech DC-series) would move from the gas chamber into another chamber where it was altered into a plasma state. It was then released from a magnetic “bottle” effect through the collimating components. This turned the mass of plasma gas and energy into a coherent energy beam as a coherent energy bolt of light and plasma. This combination of light and plasma formed the deadly bolt fired from a blaster.

The more common type was the blaster that fired a high energy particle beam that was more deadly to humanoids and other biological targets than superheated plasma (which was quite deadly anyway), but it was still effective enough against droids to put a B1 battle droid down and keep it down. Particle-beam types were also more efficient because they used less blaster gas to produce the beam than is necessary to form a plasma bolt(as plasma is a form of gas).

In particle-beam based blasters, like the E-11 used by stormtroopers, a small amount of high-energy gas moved from the gas chamber to the chamber commonly called the XCiter. In the XCiter chamber, the gas was energized by the power pack, then passed into the actuating blaster module, which, when assisted by the components in the barrel, processed the now extremely high-energy gas into a compressed beam of intense energy particles, coupled with intense light, which generated the deadly high-energy particle beam fired from most blasters. In these blasters, the combination of superhot laser-light and a compressed bolt of intense energy particles formed the deadly bolt.

Most personal blasters had two kinds of ammunition: a gas cartridge and a power cell. Less powerful weapons, like the Drearian Defense Conglomerate Defender sporting blaster, relied largely on the power cell and used only a small quantity of gas, while very powerful weapons, like the illegal Tenloss DX-2 disruptor pistol, used much larger amounts of gas. Still other weapons, namely those dating from earlier times, employed a kind of removable power cell/cartridge which supplied enough energy (though at weaker levels) to make total expenditure seldom. 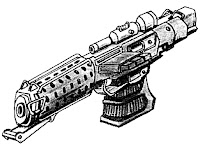 Some blasters, such as the Wookiee bowcaster, fired several blaster bolts that ricocheted off surfaces, increasing their chances of hitting something. Blaster bolts usually dissipated in a small, sparky explosion of extreme heat and force upon contact with an unshielded surface. Weapons such as Han Solo’s DL-44 blaster pistol and the E-11 blaster rifle could cause incredible destruction, and had the power to blow huge chunks from stone walls and smaller holes and pockmarks out of durasteel bulkheads, as seen Han Solo’s and Luke Skywalker’s raid on Detention Block AA 23.

Electronic enhancements
Many blasters had side attachments and accessories to aid in targeting, accuracy, rate of fire, and grip. Some known attachments included targeting lasers, electronic scopes, and larger power packs. Delta Squad’s DC-17m interchangeable blasters had sniper and anti-armor attachments for adaptability in unpredictable situations. Boba Fett’s EE-3 carbine rifle had a small scope which could interface with Fett’s helmet for increased accuracy. Jango Fett’s two WESTAR-34 blaster pistols had dallorian alloy plating, which kept the weapon from overheating.

3 thoughts to “How Stuff Works: Blasters”