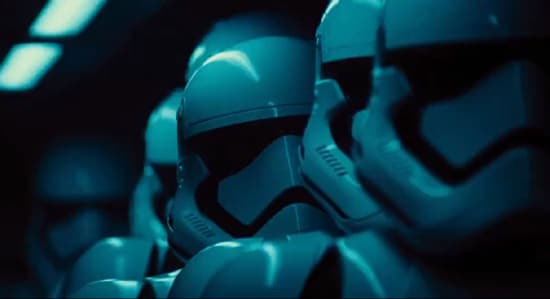 Like all Star Wars fans we watched in amazement today the new teaser trailer for Star Wars the Force Awakens. The 88 second trailer offered a first glimpse on what J.J.Abrams has in store for the beloved franchise. Reading through the comments posted in various social media, it appears that the general reaction is very positive while the excitement is certainly very high. The trailer lit up twitter, reddit,facebook and many other social media the moment it was posted online.

Dissecting the trailer one can find a lot of hints that were rumored to be true in the past but obviously there was no official confirmation. One that really got my attention however, was during the very first scene of the trailer.

Spoilers below from Star Wars Rebels and the teaser trailer if you haven’t seen it.

The trailer opens up with a view of a desert which one would assume that’s located in Tatooine before a (very stressed out) trooper comes into view. I am going to endanger a prediction and say that the trooper is probably Zare Leonis. He was first shown at Star Wars Rebels episode “Breaking Ranks” where Ezra sneaks in as a recruit at the imperial academy. During the same episode, we learn that Zare Leonis joined the Empire in order to find his lost sister. Considering that Star Wars Rebels takes place 15 years after Episode III and “Force Awakens” is essentially “Episode VII”, then we could be seeing an adult version of Zare during the trailer.

Zare Leonis in “The Force Awakens” and “Rebels”

The second hint that was long rumored to be true was the design of the new storm trooper helmets and the general upgrade their armor would get. To be honest I really like the new “futuristic” design – it pays homage to the original movies but at the same time shows hints of progress. The same can be said about the stormtrooper rifles. We only get a few seconds to see them but one can certainly assume that the “deecees” (for DC-15) are long gone.

Stormtroopers finally get a much needed upgrade

On the next scene we see Daisy Ridley’s character riding a speeder towards what looks like a city in (again) Tatooine. Rumor has it that she will be playing Han Solo’s and Leia’s daughter. We tried to identify the location of this scene but we couldn’t come up with something conclusive. The arch on the background certainly looks familiar (Anchorhead maybe?) 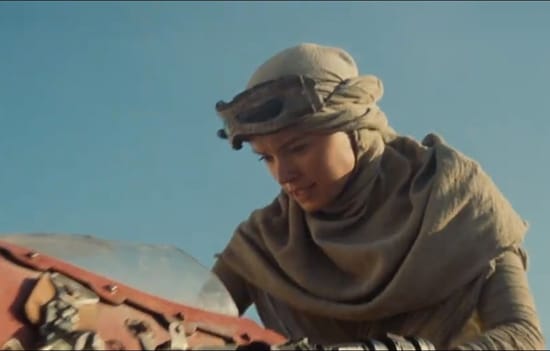 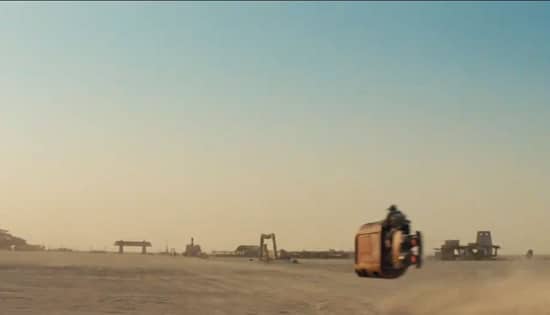 Riding towards an un-named location – it definitely looks familiar though!

And then comes the second best scene of the trailer… Four X-Wing fighters flying really low over water and chasing (?) something that can’t be seen. The first thing to notice is that there are minimum upgrades to the starfighters, unlike the trooper armor we were shown earlier. X-Wings look actually quite beat up and worn. The same can be said about the equipment of their pilots. We’re shown Oscar Isaac’s character (rumored to be Han Solo’s son) flying his ship under a lot of pressure. It’s rumored that his role has expanded after Harrison Ford’s leg injury. It’s worth noticing that a lot of elements from the original trilogy remainl in the cockpit. For example, notice the targeting computer on the upper right of the pilot. 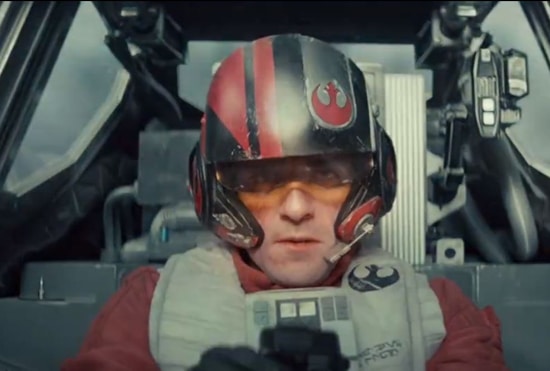 X-Wings still looking good after all these years!

Then comes what we assume to be the villain of the movie. It’s rumored that Adam Driver is going to be play that role so we’re thinking  that it’s him walking through the woods with a very interesting lightsaber design (see picture below). Could it be that he’s a Sith Inquisitor as many fan sites suggest? Could it be Luke Skywalker carrying an excalibur-like lightsaber as Mark Hamill suggested in a 1983 interview (see below for clip)? Only time will tell! 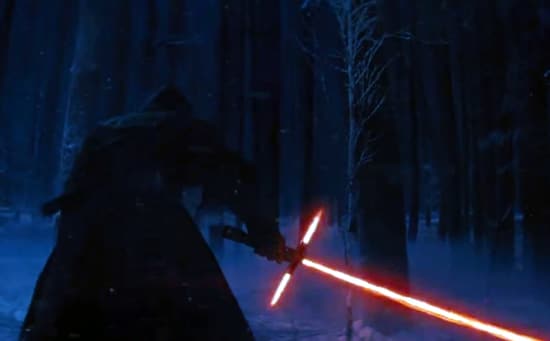 It’s definitely a Sith but we don’t know much more.

Then comes the best scene of the trailer in my opinion; The Millennium Falcon flying in the air through a series of acrobatic maneuvers. Unlike the original movies, the Falcon looks to be in a pretty good shape. Most noticeable differences are the glow of the engines as well as the replacement of the round antenna that looked like a satellite dish with a square one. It appears that Han Solo’s ship has received some upgrades. We are also treated with a 2-3 second view of two Tie Fighters shooting at the Falcon but we can’t really see any changes on those from the original trilogy. 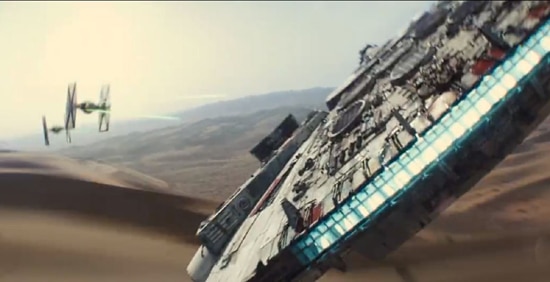 The Millennium Falcon is back and with some upgrades!

The Falcon is the last thing we see before the familiar Star Wars logo. We certainly like J.J.Abrams’ gentle interventions in the visuals of Star Wars and definitely look forward to see more over the next couple of months!