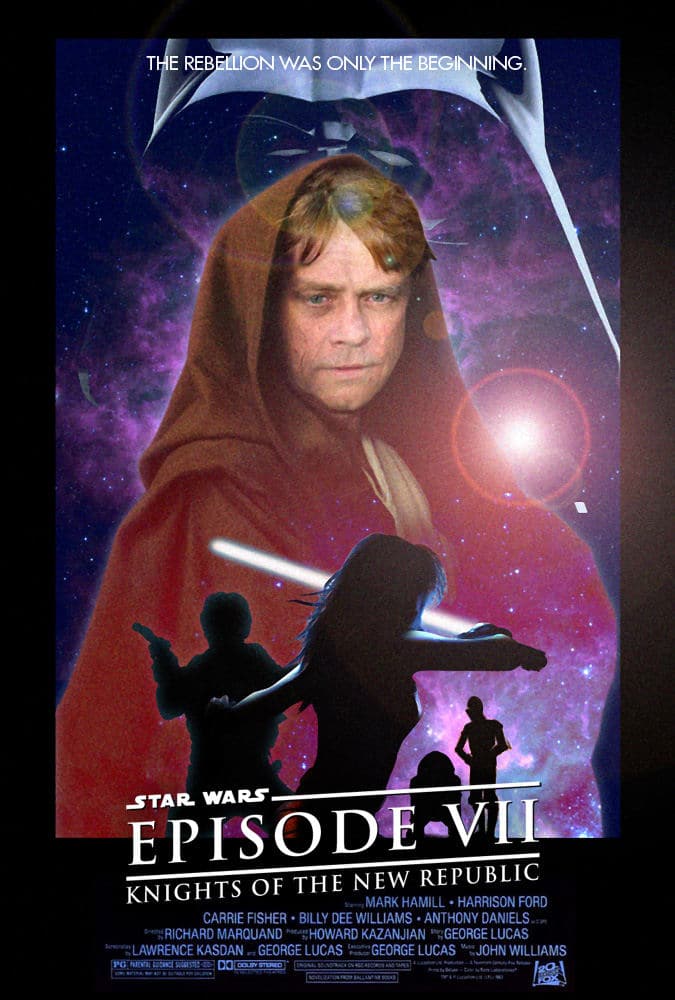 Everyone is talking about Star Wars: Episode 7, what it’s going to be about and who will play key roles in the new film in 2015. According to sources linked to the sequel, Harrison Ford is open to bringing Han Solo back to the big screen.

Entertainment Weekly Inside Movies has more:

“Harrison is open to the idea of doing the movie and he’s upbeat about it, all three of them are,” said one highly placed source, referring to Ford, Mark Hamill, and Carrie Fisher, the trio that made a hyper-speed jump to global fame on May 25, 1977, the opening night for George Lucas’s original Star Wars film.

The actor, now 70, is plenty proud of Indy, Jack Ryan, John Book, and Dr. Richard Kimble but in the past he didn’t disguise his disdain for Solo. “As a character he was not so interesting to me,” the frosty Ford explained in an ABC interview in 2010.

The slippery Corellian pilot’s great talent is keeping himself alive, a skill that apparently extended beyond the screen. Solo’s death scene in early outlines for Episode VI: Return of the Jedi was scrapped, according to Ford and others, because the character was a top seller as an action figure.

Read more in the full story.

Ford supposedly told ABC in that same interview “I thought he should have died in the last one to give it some bottom…George didn’t think there was any future in dead Han toys.”

Despite how he felt about the character, he still says he’s willing to come back and we’re betting the Disney buyout has something to do with it. I mean, imagine the amazing paycheck they would be able to offer him for such a role? But maybe it’s about more than just the money. Perhaps Ford is interested to see what a new leader will do with the story. He has expressed a difference of opinion between he and George on the character and the story so maybe he feels like a little fresh perspective is worth the try?

Either way, we have to wait and see since Ford won’t give a definitive answer regarding the role until there is a director and script in place but a positive signal from Ford means there is a good chance we will see him back in action in Episode 7.

What do you think about Ford playing Solo and Solo returning to another sequel to the Star Wars story?

That’s not all for the Episode 7 rumors, however. There’s a lot of talk going around and while much of it is not confirmed yet, here are some more rumors related to the film.

We already brought you the story of how Star Wars Episode 7 is believed to be a completely original story and along with this we have tons of speculations about who will write and direct it. We talked about how Solo may make a return but where would the story be without Luke Starwalker? Well, one rumor says he might return as well:

Ok guys, by now you know of my history with this particular source and the stellar information that has been given us about STAR WARS way back in 2009. We remain in touch to which I am deeply grateful. Again this source has spoken up about what we can now expect from the Disney / Lucasfilm tandem in the coming years, and it is all very, VERY exciting.

Here is what my source has told me, some segments and some word for word, from his email I just received:

“”Disney now has the power to make STAR WARS films, and everything else in the Lucasfilm archives. The movies I told you about are indeed the primary focus. Luke Skywalker is a primary focus, as are many of the original trilogy cast. Disney also realised that George Lucas and STAR WARS are one and the same, so George will certainly have a voice on any angle taken, in fact I believe it’s one of many stipulations. However he will no longer have creative control, and as I said before George was already looking at other creative talents to bring his canon to life back before Disney and Lucasfilm really started negotiating (or at least to the best of my knowledge)…””

This is just part of a lengthy post at Market Saw that is well worth the read. Some of the names being tossed around make us very excited: Steven Speilberg, Neil Blomkamp, Alfonso Cuaron, Matthew Vaughn, Darren Arnoksy and Joss Whedon (my favorite!). So while other rumors claim there will be a complete detachment from the original trilogy, this one claims to be “100% accurate as of now” and says that there WILL be a connection in the new story and the old movies.

I guess we’ll just have to wait and see…

Moving on to some more rumors, we have another contradicting report that the actual story will be more than 50 years out from the last trilogy and that there is a good possibility that we will see Tatooine and possibly even the actual homestead in the next film. Seems to contradict some of the other rumors but at this point, anything is possible, right?

Whatever happens, they need to act fast. As the LA Times point out, in order to have a 2015 release date, they need to begin productions very soon:

Whatever direction they move in, Disney and Lucasfilm will need to move fast. A 2015 release target means that significant development progress would need to happen in 2013, and many of the industry’s splashiest genre names — including J.J. Abrams and Joss Whedon — have a dance card filled with new movies.

In more news, there’s a rumor that Matthew Vaughn may direct Star Wars Episode 7 (as we mentioned above) and Collider.com has more info about that:

I’m hearing that Matthew Vaughn, the director of Kick-Ass, Stardust, Layer Cake, and X-Men: First Class, is in talks with Lucasfilm to helm Star Wars: Episode VII.  My sources tell me this is the main reason he dropped out of the X-Men sequel (which Bryan Singer is now directing).

Like everything else, it’s just a rumor but he has some good points on his side for why this particular rumor might be true.

Another potential director is Colin Trevorrow. Celebuzz claims an inside source told them that “Trevorrow, the director of sci-fi indie Safety Not Guaranteed, has had early discussions with Lucasfilm about Episode VII.”

Again, it’s the rumor mill spinning but you can head over to Celebuzz to read more.

While we don’t know who is going to direct the new film(s), there is one name we can check off the list: Zack Snyder.

“I don’t think I’d be interested in [directing it],” Snyder said during a recent interview. “I’m a huge ‘Star Wars’ fanatic. I just think doing [episodes] seven, eight and nine is just a slippery slope. It’s a whole other mythological experiment I’m excited to see, but it’s a lot of effort.”

So what do you think? What rumors have you heard?

What rumors do you hope are true?

Who do you want to write and direct the next Star Wars trilogy?