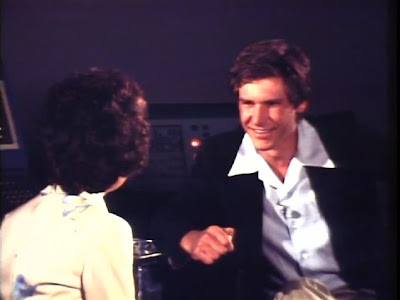 Yesterday, the New York Times posted a story about a rare 1977 Harrison Ford video interview conducted by a Dallas-Fort Worth news channel reporter just as Star Wars (A New Hope) was making waves across the country during its initial release:

Wearing lapels as wide as the Millennium Falcon itself, Mr. Ford actually seems gracious about the budding fantasy franchise and complimentary to its creator, George Lucas, telling his interviewer that though he doesn’t regard himself as the Buck Rogers or Flash Gordon type, the film works because “it’s finally about people and not finally about science, so the energy of the movie goes towards exploring these human relationships.”

The interview, which apparently had first been posted to the original reporter’s website bobbiewygant.com back in July (and contains scores of other filmed interviews), presents a rare peek at the actor on the brink of super-stardom in 1977. Check out the New York Times story and the video interview below: