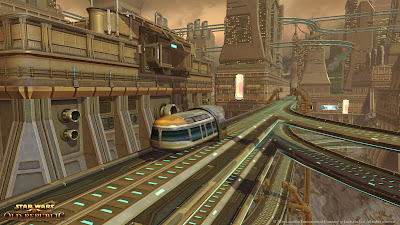 This week’s Star Wars: The Old Republic update takes a closer look at the planet of Corellia. As a pivotal part of the Republic’s strength, the planet may be a consistent target for the Imperial struggle for dominance.

Home to some of the Republic’s most influential leaders, the notoriously independent world of Corellia is of critical strategic significance. It’s been a symbol of personal and economic freedom since the Republic’s earliest days, and it’s become the center of all the Republic’s industry and enterprise. Despite long-standing evidence of corruption in Corellian government, the citizens have always been staunchly loyal to the Republic. Losing contact with the planet and receiving images of destruction has caused grave concern in the Senate for what may be happening on the ground in Corellia’s capital.

Read more on Corellia via the updated Holonet. While you are checking that out, also be sure to catch the latest issue of the SWTOR web comic Blood of the Empire. Sith on sith violence spreads in the 11th issue bringing intense battle to the Imperial academy.

In the eleventh issue of Blood of the Empire™, Teneb Kel faces off against his enemy, Exal Kressh, for the final time. Two Sith apprentices, both aware of the secrets of the Emperor, now locked in battle in the tombs below the Sith Academy on Korriban–what will become of them? And who will choose the future of the galaxy?

Read the latest Blood of the Empire issue and catch up on previous issues by visiting the SWTOR website.