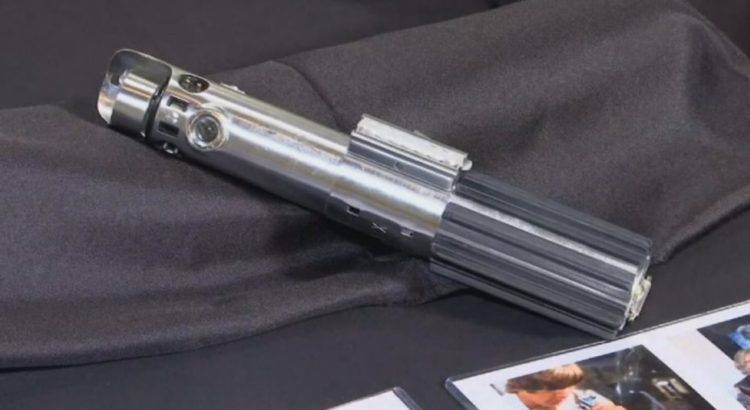 The iconic movie prop which was passed on from Obi-Wan Kenobi to Luke in the 1977 movie, Star Wars: A New Hope has been announced for an auction which will take place from December 11th to the 14th. Star Wars fans were stunned by the news as this would be an unprecedented piece of memorabilia to add to their collections. However, unless you came across this news with hundreds of thousands of dollars at your fingerprints and playing with a sign up offer from valley forge, your chances of bidding for this are unfortunately very low.

The Lightsaber is said to fetch upwards of $150,000 with some sources saying it could reach $200,000. This auction will be held by one of the largest dealers of authentic Hollywood collectables, Profiles in History, in Los Angeles. There will also be other famous objects set to be auctioned such as a pair of C-3PO’s hands and an original TIE Fighter Helmet from Star Wars also priced close to 0,000.

In an auction held some time back, another of Luke’s Lightsabers was sold at 0,000 which puts anticipation of the current price to be much higher than 0,000 at the upcoming auction. With the way the Star Wars story has unfolded, it may be the last time that Luke Skywalker is seen holding a Lightsaber in the franchise, adding more of an emotional touch to the sale.

A Wrinkle in the plan: Is it the Original Lightsaber?

In a surprising tweet, Mark Hamill, the actor for Luke Skywalker himself, doused the flames a bit after the news of the auction came out, stating how he used many lightsabers instead of just one. (https://twitter.com/HamillHimself/status/1069963379182309382)

This means that he used no “original” Lightsaber. This tweet has gained a lot of attention from the public as people were ready to spend their life savings on trying to get this artefact.

He also later went on to tweet that he was not trying to disinherit the Lightsaber itself and that it is real and is probably one of the many that he used.  (https://twitter.com/HamillHimself/status/1070014293817593857)

These tweets have led a large online debate among fans and people who worked on set. One person, in particular, Roger Christian, who was a set decorator at the time, had a tweet in response to Mark Hamill. He stated how he had touched up several of the lighsabers during the making of the movie, and that there wasn’t any one in particular.

However, this news has still not deterred some fans from wanting to purchase this prop as it is still a valuable piece from the movie set. Those who still want to bid on these items will have to purchase a ticket right away to Los Angeles as only a few days are remaining. They will even have the option to place bids online on Profiles in History’s website.

Are you looking to get hold one of yourself? Let us know in the comments below.