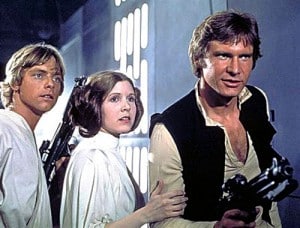 We brought you the rumor yesterday of Carrie Fisher returning to Star Wars and it seems today it was confirmed true by George Lucas. But of course, that’s not all! According to Lucas, the whole crew will be back together in the new films- Harrison Ford, Mark Hamill and Carrie Fisher!

The original stars of the series have previously hinted that they would be making a comeback but this is the first “official” word that it is true.

“”We had already signed Mark and Carrie and Harrison — or we were pretty much in final stages of negotiation. So I called them to say, ‘Look, this is what’s going on,'” Lucas told Bloomberg Businessweek when asked about whether he kept the actors in the loop about the Disney acquisition.

So it looks like some of the stars had already signed on the dotted line before they even knew that Disney would be buying Lucasfilm for over $4 billion.

Just after revealing the news, Lucas did seem to realize he may have said too much and admitted that maybe he wasn’t supposed to say that they had been in negotiation with these actors for that long. But the cat is out of the bag now.

So we know the original trio are back but we still don’t know in what capacity. We also know that Disney is planning all of these spin-off films and you can guarantee there will be tons of branding. Get ready for the toys to hit the shelves before the movie even releases.

As for the film itself and what role Ford, Hamill and Fisher will play… we just have to wait and see.

“”Star Wars: Episode VII” will be directed by J.J. Abrams and will hit theaters in 2015.