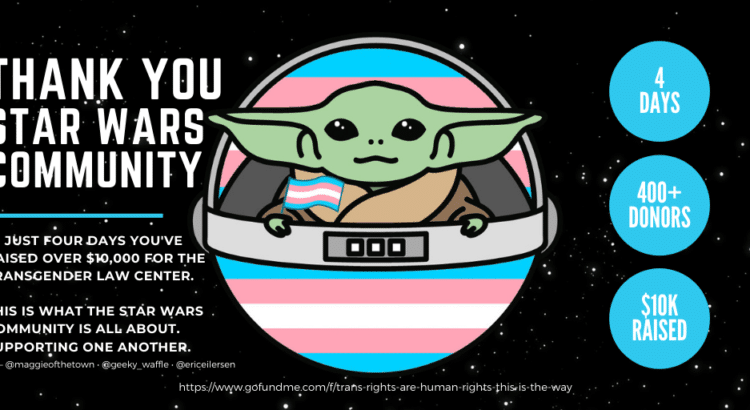 Here’s a happy news story for a change: Star Wars fans raise over $5,000 in support of trans rights!

It all began when over the past week or so, Mandalorian actor Gina Carano’s social media posts stirred up controversy. She seemed to have a lot to say about a lot of things, and not all of it was kind or flattering.

But Star Wars fans are a special breed, and definitely passionate, and decided to do something to counter the hurtful language she was using. A group of Star Wars fans decided to come together and create a GoFundMe to support trans rights.

Within the first two hours of creation, they had already blown past their initial goal. At the time I am writing this, they’re over $10,000 which will go to support the Transgender Law Center, an organization that “changes law, policy, and attitudes so that all people can live safely, authentically, and free from discrimination regardless of their gender identity or expression.”

Trans Rights are Human Rights: This is the Way

Recently, the hype around the second season of The Mandalorian has been colored by the unfortunate ignorance of one of the major castmates. Their rhetoric has included, amongst other things, the dismissal of pronoun importance – particularly in the trans community.

Luckily, there are more of us.

As a loving, inclusive Star Wars community, we encourage everyone looking forward to the upcoming adventures of Mando and The Child to help out our neighbors in the trans community by supporting the Transgender Law Center.

What better way to show that the heart and soul of a galaxy far, far away than by showing support to those being shunned at a time when they are most vulnerable? Every single bit helps, and at the end of the day, let’s flood the Star Wars community with support, love, and vibrance for all gender identities.

Because that is the way.

Want to support the cause? Donations are 100% tax deductible.

Here are some other ways you can help: