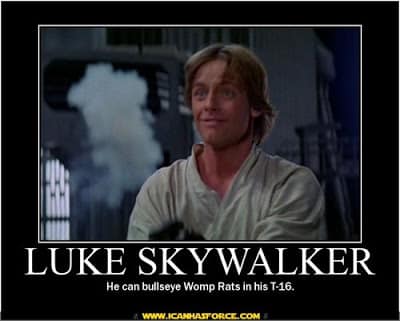 Luke snatches defeat from the jaws of victory in this re-edit of “A New Hope”
After boasting to the more experienced pilots of Red Squadron, he arrives late for the attack, disobeys orders and ignores Obi-Wan’s repeated pleas to use the force. Han Solo is not impressed with Luke and must now deal with a vengeful Darth Vader and all Red Five can do is watch from above as the veteran Red Leader calmly demonstrates the correct way to fire a proton torpedo down a thermal exhaust port.

Mark Dury mixed dialogue from the original trilogy with the Death Star scene in A New Hope, turning Luke into a worthless moron who can do nothing but watch as someone else picks up his slack.