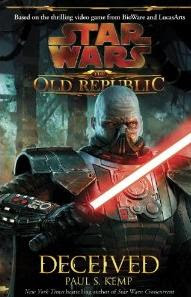 Sue Rostoni updated her schedule blog today, and most of 2011 is affected. A lot of the moves are only by a month or so, however, and perhaps the biggest news here is that Timothy Zahn’s Allegiance sequel finally has an official title: Hand of Judgment. It’s also moved up a month to July.

The most pressing move is Paul S. Kemp’s The Old Republic: Deceived, which drops from December to March – to be closer to the release of the MMO. Joe Schreiber’s Red Harvest moved into the vacant late-December spot.

Also drastically pushed back were Alex Irvine’s Nomi Sunrider novel (from May to December 2011) and Pablo Hidalgo’s Essential Reader’s Companion (to March 2012.) As for the rest, check clubjade’s book schedule.