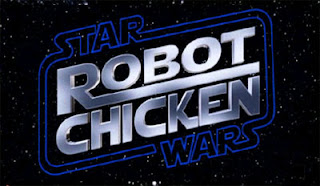 Adult Swim’s Robot Chicken returns to that galaxy far, far away for a brand-new Star Wars-themed special premiering December 12 at 11:30 p.m. (ET/PT). This third installment in the Robot Chicken: Star Wars trilogy follows the two previous specials, which resulted in multiple Emmy nominations and numerous Annie Awards for both specials, the writers, Ahmed Best for voice actor and Seth Green for directing. Robot Chicken: Star Wars Episode III, to be directed by Chris McKay, marries the satirical sensibilities of Green and Matthew Senreich’s (Stoopid Monkey Productions) Emmy-winning Robot Chicken with characters of the Star Wars universe. The specials and the Robot Chicken series, the highest-rated original program on Adult Swim, are created in conjunction with ShadowMachine  Alex Bulkley and Corey Campodonico.

“We’re telling more of a linear story this time that covers the series from start to finish,” says Green. Senreich says, “We wanted to take the Star Wars universe and see if through the eyes of our Robot Chicken: Star Wars Emperor Palpatine, Darth Vader, Boba Fett and Gary the Stormtrooper. We’ll still flip around the universe but we’ll get a unique perspective from the bad guy side, from people who just want to rule the universe.”

Whatever it is, I’ll tune in.

As for that other TV parody, it now has a poster.