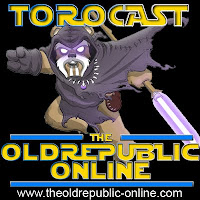 They guys over at TOROcast have put up an excellent interview with Deborah Shin, Marketing Manager for BioWare, and Rob Cowles, Marketing Manager for Lucas Arts. I wasn’t aware that this was interesting people until I found out they work closely with Darth Dahlberg on what, were and when new info is being released on Star Wars: The old republic.

While at E3 2010 Brandon and I had the chance to sit down and talk with Deborah Shin, Marketing Manager for BioWare, and Rob Cowles, Marketing Manager for Lucas Arts. The first thought through your mind is most likely, “why in gods name would I want to watch an interview with the Marketing Managers for a video game?” Well, the answer to that question is this, Deb and Rob work closely with Sean Dahlberg in picking out what and when something will be released about TOR. The three of them together come up with the weekly updates, and put them through BioWare, Lucas Arts, as well as EA for approval.