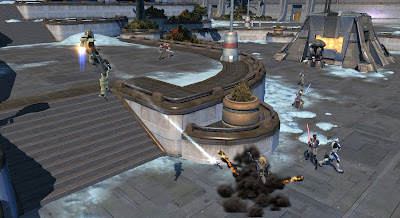 The long awaited testing phase of Star Wars: The Old Republic has officially begun. The announcement was made today in the game’s Friday release and testers that have been selected will gain access to the new Star Wars universe.

From LucasArts: “Game Testing for Star Wars™: The Old Republic™ is underway! Those selected to test will gain access to the game and be able to provide valuable feedback to help tune particular areas of gameplay and begin the process of balancing and tweaking content.

Game Testing is an on-going process being rolled out in several phases. These phases began with smaller, more focused tests with community members from North America, and later will expand to other territories. Users selected for the test program will be notified via email with more information on accessing the Game Testing Portal. Those not chosen yet may be selected in the next wave!

For those who haven’t signed up already, it’s definitely not too late! Those who are interested but are not already a member of the Star Wars: The Old Republic community need only visit here to sign up, and then check the box to indicate they are interested in becoming a tester. For those who are already a member of the community, they can go to the Game Testing Portal to opt in for the testing program. Note that you must be at least 18 years of age to accept the Game Tester Agreement.

Please keep in mind that there are no guarantees of being selected once the sign-up process has been completed. For more information about testing Star Wars: The Old Republic, visit the Game Testing FAQ.”

The testing will be rolled out in several phases, so if you didn’t make it in this time there will be more chances later. The early tests will begin with a small amount of North American testers, later expanding to other territories.

Check out the official release for more details.