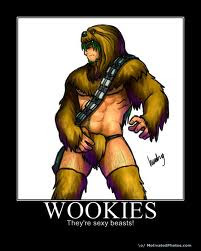 Daniel Erickson has made a post on the official forums with some clarification. Apparently, in a conversation with a fan at PAX, he said something like (when speaking about what species players will be able to play): “If you can’t imagine it making out with Princess Leia, you probably won’t be able to play it.” People got confused over that since a lot of people tend to have a pretty strong imagination and can imagine all kinds of things making out with Princess Leia . So Daniel posted:

Sorry for the confusion. Booth chat is, let’s be clear, not an official information release. What you got was one line of an extended conversation that was had between me and one of the players at the booth. We started talking about what made a hero in Star Wars and then, once that was clear, there were some jokes about what the romances would look like had we gone for the toybox approach of letting you play anything in the action figure line. That’s the part of the conversation the quote came from.

The first part was merely a repetition of something we’ve said before. Namely that lead characters in an RPG must be something the player can relate to. There has never been a movie or major Star Wars series with a complete freak job as the lead and that’s because dramatically it doesn’t work. We don’t understand what it means to be a giant lizard or a droid or a walking ball of jelly. We love the weird characters but they are always the sidekicks, not the emotional connection in the movie. To do an RPG that way every NPC you ran into would have to react to you depending on their own cultural bias and the entire “into the strange” adventure that is Star Wars would be lost as you would be the strangest thing in the room. People would constantly be asking you for information about your weird species and their emotional content that the vast majority of players simply wouldn’t have and their ability to really BE this character would be nil.

So whether it’s Dragon Age, Mass Effect or The Old Republic, PCs are near enough to humans for us to crawl into their skin. They have generally understandable facial expressions, they don’t look ludicrous speaking the basic language, they can interact with the rest of the galaxy without a constant “what the heck?” reaction from the NPCs. The freaks, the droids, the weird that we get to know and learn about–that’s where our companions come in.

It’s okay to turn to your companions and say “What are you supposed to be?” It’s not okay to look in the mirror and say that.

In the future I can see a day where we would do a Trandoshan or Wookiee type story but it would have to be just that. Not a simple graphic swap where now your smuggler is a giant lizard man and nobody notices but a full class story where you learn what it means to be this strange alien and deal with the rest of the galaxy and their reactions. For the present, however, our heroes are our projections of self, headed into a galaxy of wonders and adventures.

I know that this isn’t what some people want but I hope it helps them understand that game design isn’t simply throwing random features into a game because they seem cool. You have to have a goal, a final holistic ideal that you’re trying to hit. The Old Republic is, and always has been, about starring in your own version of a Star Wars movie. Not playing a background character from scene 5, not about living a humdrum day to day existence in the Star Wars worlds (there are no refreshers–sorry!) and not about pulling out the extended action figure line and getting to use it as virtual costume party. None of these are, by themselves, bad goals and could absolutely be fun in a very different sort of game. But in TOR they would work directly against what we were trying to achieve.

So did we limit species choice for romances? No. Did we limit them for our goal of bringing cinematic storytelling and the dream of living the Star Wars movies to the MMO space? Absolutely.

So I guess that proves that Wookiees won’t be a playable species. Though before Wookiee lovers despair to much, it also offers the possibility of, sometime in the future, there being a truly Wookiee-oriented story where you not only get to play one but actually experience what it’s like to be one (instead of just being a human with fur who can only speak in grunts). At least I certainly hope that they’ll do that in some kind of expansion or DLC or something.

A few more Pax  interviews have surfaced.  MMORPG a held an interview with Daniel Erickson, which they wrote up as an article. Here’s an excerpt:

Once it was clear that Dan couldn’t talk too much about character creation just yet, we moved on to his role on the team: containing the massive winding monster that is the game’s script. We asked him how big the script was actually getting, or perhaps tome would be a better word. Dan said they’d recently hired a new writer and his “initiation” was to catch up to where they are with the story by reading a 1,000 page summary text. Yeah… that’s a lot of Star Wars fiction.

We asked Dan what exactly being the lead writer on such massive project is all about. There are so many lines of dialog, so many quests, so many classes to write for… not to mention all the different choices players have when it comes to each quest and the resulting paths opened with each choice. It’s plain to see that managing such a project would be a nightmare of continuity. That’s what Daniel Erickson is tasked with. He’s the task master when it comes to keeping it all together, and more than that finding a way to make each section of the game somehow interconnected and not feeling like just a bunch of pointless exercises in killing womp rats.

A final interview, this one with Blaine Christine, is over on Massively. Here’s an excerpt:

Massively: What can players expect from the endgame?

Blaine Christine: Let me preface it by saying that we know endgame content is very important for folks, so it is something we are definitely going to focus on. We have not released a lot of details yet, but what we have said is that we will indeed have raids. We haven’t announced specifics around what will definitely be endgame content. Additionally, we have mentioned our player vs. player Warzones. We will have multiple Warzones. Those will mostly be higher-level content, where players participate in larger player vs. player battles, where they experience epic Star Wars ground combat on kind of a grand scale. Then beyond that, we expect — because it’s a BioWare game with BioWare storytelling and multiple branches through the stories — part of our endgame is players playing through classes that they haven’t played or replaying through certain classes to see how certain companion characters or certain branches can affect the outcome of that particular storyline. Additionally, we will have the auction house, crafting and harvesting, guild play, and all the things people are expecting out of an MMO.