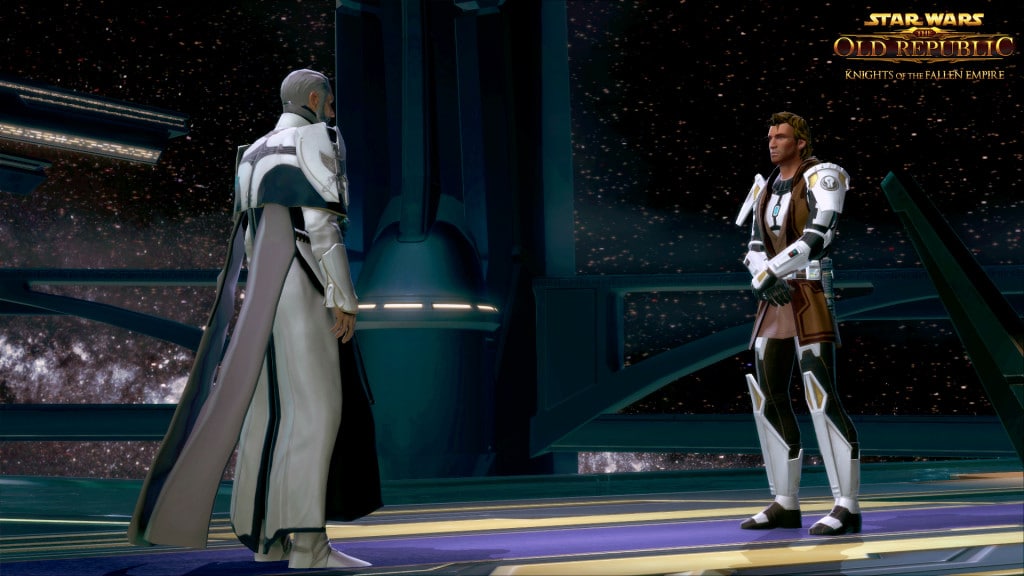 BioWare  have just published the first class story summary in preparation for KotFE.

To Battle With Darkness

What you are about to read is an excerpt from the official Star Wars™: The Old Republic™ Encyclopedia. It will describe an overview of all 3 Acts of the Jedi Knight Class story. Although we try to avoid them wherever possible, this excerpt will contain spoilers. Please read at your own risk…

One of the strongest Padawans the Jedi have seen for generations races into peril when a surprise attack by savage native warriors nearly devastates the Order on Tython. Surviving a fierce battle against these monstrous enemies and saving numerous students, the Padawan receives a challenging new teacher from the High Council: iconoclastic war hero Master Orgus Din. Together, they hunt a mysterious foe who has targeted the Jedi for extermination.
The Padawan and Master Orgus form an uneasy alliance with mistrustful Twi’lek colonists whom they believe may hold the answers to this sinister plot. The Padawan must overcome conflicts within and fearsome enemies without to save the Jedi Temple and defeat the twisted plans of Bengel Morr, a corrupted Jedi hero. In recognition of this victory, the Padawan receives a promotion – and a dangerous new mission worthy of a Knight of the Republic…

Chapter 1: The Vengeance of Darth Angral

The Knight defeats a cunning plot against the Republic capital world of Coruscant, and in the process kills the only child of nefarious Sith Lord Darth Angral. The cold-blooded Angral vows revenge, revealing to the Republic that he has seized multiple top-secret Republic superweapons, which he plans to turn against their creators. With billions of lives at stake, Grand Master Satele Shan assigns the Knight new allies to help face this threat: troubled Padawan Kira Carsen and the steadfast astromech droid T7-01.

The Knight’s team races across the galaxy on a desperate hunt for Darth Angral’s battle cruiser and its Desolator superweapon, a devastating device capable of laying waste to entire Republic worlds. The Knight survives impossible odds to defeat Angral’s menacing Sith apprentices and thwart their plans to unleash world-shattering destruction.

These victories come at great cost, however. Legendary Jedi heroes and stalwart Republic soldiers pay for each world saved with their own lives. As Darth Angral bings the Desolator superweapon to bear on the Jedi homeworld of Tython, the Knight races to confront Angral in a final duel to decide the fate of the Jedi Order. Though Darth Angral falls in defeat, the Empire he served breaks the Treaty of Coruscant to war against the Republic once more.

Chapter 2: Hunt for the Sith Emperor

As Republic and Imperial forces gather for a final devastating clash, the Knight joins a daring plot to capture the Sith Emperor and force a peaceful surrender. The stubbornly confident and charismatic Jedi Master Tol Braga, mastermind of this mission, guides the Knight’s search for lost secrets of the Empire. Only this forgotten knowledge of secret plans and advanced technology can reveal the Emperor’s hidden fortress and leave the Sith leader vulnerable. New allies join the Knight’s crew and elite Jedi warriors from Master Braga’s strike team aid their search on the embattled planets of Hoth and Balmorra.

The plan to invade the Emperor’s fortress succeeds beyond Master Braga’s greatest ambitions. However, the Jedi find more than they bargained for when they finally confront the Sith leader in his lair. The Emperor is more than a man – he is the living embodiment of the dark side. Armed with incalculable powers of corruption, the Emperor easily defeats the Knight, Master Braga, and their fellow Jedi, twisting them all to the dark side.

When Master Orgus Din, an old ally reaches out through the Force, the Knight is able to break the Emperor’s mental domination. Although Master Braga and the rest of the Jedi strike team seem to have vanished, the Knight is able to free other allies and escape the hidden fortress. There is one final surprise in store, however: a confrontation with Sith executioner Lord Scourge, the notorious “Emperor’s Wrath.” To the heroes’ stunned surprise, Lord Scourge pledges to help the Knight defeat the Emperor; he surrenders and demands to be taken before the Jedi High Council.

Lord Scourge reveals the Emperor’s true goal for the war: to complete a Sith ritual that will grant him unlimited power and immortality by eradicating all life in the galaxy. First, the Emperor requires a sacrifice to fuel his horrific ritual: the destruction of an entire world and its people. The Sith leader has dispatched his agents of evil across the galaxy to ensure that billions die. Though the Emperor’s servants are unaware of the fate that will befall them when his ritual is complete, Scourge experienced a vision that revealed his Master’s secret plot – and the brave Jedi Knight who would thwart it. Lord Scourge vows to aid the Knight in defeating the Emperor and saving the galaxy.

The Knight’s crew races to save worlds targeted by the Emperor, discovering the fates of Master Tol Braga and the Jedi strike team. These fallen Jedi remain thralls of the Emperor, turned against the very people they once swore to protect. The Knight must confront these former allies and decide their fates before facing the Emperor himself. In a final apocalyptic duel, the Knight battles the Sith Emperor for the fate of the galaxy – and changes it forever.