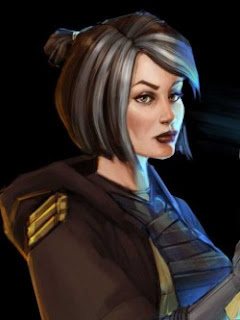 Many people have speculated about who the girl fighting Darh Malgus in last years hope trailer is. Yesterday Alexander Freed from BioWare confirmed that the girl was no other then Satele Shan:

There’s been a lot of (understandable) confusion about Satele Shan, so I figured I’d clarify a few points:

First, yes–Satele Shan is the Jedi depicted in the Hope trailer. When Satele originally appeared in the Threat of Peace comics, her appearance wasn’t yet final in-game. Ultimately, we’ve gone in a different visual direction for the character, and you’ll be seeing more consistent portrayals in the future. (One of the perils of releasing information–even seemingly innocuous information–so early!)

Second, regarding Satele’s age and experience–at the Battle of Alderaan, Satele is a fully trained Jedi Knight. By the time Threat of Peace rolls around, she’s had significant real-world experience and trained under several Jedi Masters, Dar’Nala included; she’s a candidate for becoming a Master herself. So she’s older than she looks… but Darth Malgus still has a few years on her!

Third, to answer this thread specifically… no, that wasn’t Tavus leading troops at the Battle of Alderaan.

One of the most interesting facts about Satela Shan – apart from her being a powerfull Jedi master – is she is believed to be a descendant of Bastila Shan and Revan. It’s confirmed on her Holonet entry that she’s a descendant of Shan, but we only have a few quotes from the comics to tie her up to Revan. This being one of them: