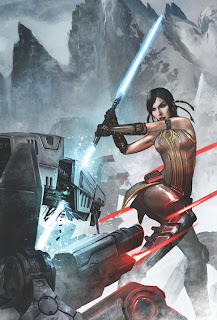 DARK HORSE CONTINUES ITS STAR WARS®: THE OLD REPUBLIC™ SERIES WITH NEW MINISERIES THE LOST SUNS03/09/2011 11:20amMARCH 9, 2011, Milwaukie, OR—Dark Horse Comics, in collaboration with LucasArts and BioWare, is proud to announce a new chapter in Star Wars: The Old Republic, the comic series that acts as an invaluable companion to the upcoming massively multiplayer online role-playing game of the same name. Featuring a story by BioWare’s senior creative writer, Alexander Freed, that runs concurrent to the game’s plot, The Lost Suns comes straight to you with new twists, a new mission, and a new hero!“The Lost Suns is our chance to craft an Old Republic story we could never tell in a video game,” Freed relayed. “For readers familiar with the setting, the comic starts when the game starts and showcases events and mysteries key to the battle between Republic and Empire. For readers who’ve never heard of the game, we want to recapture the Star Wars® sense of adventure in a strange universe, where the stakes are impossibly high and treacherously personal.”Featuring art from George Freeman (IDW’s Angel) and Dave Ross (Star Wars: The Old Republic—Blood of the Empire, Star Wars: Dark Times), with covers by Benjamin Carré (Star Wars: The Old Republic—Blood of the Empire), the five-issue miniseries focuses on a time of tense peace. Thousands of years before Darth Vader and the events of the Star Wars films, the Republic fears a second war with the Sith Empire, and only Theron Shan, son of legendary Jedi Master Satele Shan, will keep both sides at bay. He’s a spy, not a Jedi, and his newest assignment will be a true test of his skills! Find out in The Lost Suns if Theron Shan can discover the dark secrets behind the treaty that brought peace to the galaxy as he searches for Jedi Master Ngani Zho—thought lost in Sith space—while dealing with a troublesome thief, as a crew of Sith Knights begin to tighten the noose in their pursuit of Zho!Providing key plot development for the soon-to-be-released online game Star Wars: The Old Republic, The Lost Sunsfrom Dark Horse Comics premieres in June with an all-new story that helps unfold the actual events in the game! This unique tie-in series also marks the debut of the Sith Knights!

About BioWare BioWare develops high quality console, PC and online role-playing games, focused on rich stories, unforgettable characters and vast worlds to discover. Since 1995, BioWare has created some of the world’s most critically acclaimed titles, including Baldur’s Gate™, Neverwinter Nights™, Star Wars®: Knights of the Old Republic™, Jade Empire™, Mass Effect™ and Dragon Age™. BioWare operates in Edmonton (Alberta, Canada), Montreal (Quebec), Austin (Texas), Fairfax (Virginia) and Galway (Ireland). In 2008, BioWare was acquired by Electronic Arts, a leading global interactive entertainment publisher.Currently announced projects at BioWare include the development of ongoing downloadable content for Mass Effect 2, one of the highest rated video games of all time, Dragon Age 2, the highly anticipated sequel to 2009’s “RPG of the Year” Dragon Age: Origins, and the story-driven massively multiplayer online game, Star Wars®: The Old Republic™.About LucasArts LucasArts is a leading publisher and developer of interactive entertainment software for videogame console systems and personal computers. The company was founded in 1982 by filmmaker George Lucas to provide an interactive element to his vision of a state-of-the-art, multifaceted entertainment company. More than two decades after releasing its first game, LucasArts continues to introduce new heroes for the next generation of gamers, consoles and computers. With the last Star Wars movie released in 2005, LucasArts’ games play a vital role in the future of the Star Wars brand, as well as the continuation of the classic Indiana Jones adventures. With franchises such as Star WarsBattlefront, LEGO Star Wars and Knights of the Old Republic, which have garnered numerous industry awards, as well as heralded commercial success, fans can expect more great entertainment in a galaxy far, far away.About Dark Horse Comics Since 1986, Dark Horse Comics has proven to be a solid example of how integrity and innovation can help broaden a unique storytelling medium and establish a small, homegrown company as an industry giant. The company is known for the progressive and creator-friendly atmosphere it provides for writers and artists. In addition to publishing comics from top talent like Frank Miller, Mike Mignola, Neil Gaiman, Gerard Way, and comics legend Will Eisner, Dark Horse has developed such successful properties as The Mask, Timecop, and SpyBoy. Additionally, its highly successful line of comics and products based on popular properties includes Star Wars, Indiana Jones, Buffy the Vampire Slayer, Aliens, Conan, Emily the Strange, Tim Burton, Trigun, Serenity, and Domo. Today Dark Horse Comics is the largest independent comic-book publisher in the US and is recognized as one of the world’s leading publishers of licensed comics material.