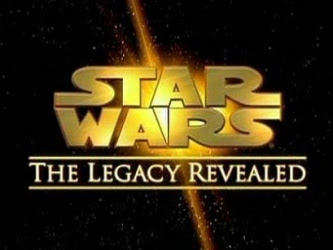 Thirty years ago, an unheralded film known as Star Wars opened in theaters and took audiences on a groundbreaking journey to a galaxy far, far away. It instantly seized the public’s imagination, and three decades later still claims that grasp.

Through interviews with politicians, academics, journalists and critics — all of whom weigh in on the enduring appeal of George Lucas’s creations — the special demonstrates that Star Wars isn’t just a high-action adventure in space. It’s a remarkably complex and sophisticated story about power, politics, sin, spirituality and redemption–almost Shakespearean in its power, humor, presentation and influence.

The special makes the argument that Star Wars‘ intensely compelling stories — borrowed from diverse traditions, from Greek mythology and American westerns to the Bible and even Vaudeville — compel us to explore some of the biggest questions of our time. Star Wars: The Legacy Revealed explores that view through interviews with politicians, academics, journalists and critics, who all weigh in on the creations of George Lucas. The special shows how seldom a movie can make us laugh and think about our role in the universe — which may be why it has stood the test of time.

“””””The enduring appeal of Star Wars,” says Tom Brokaw, “is that it’s this vastly entertaining piece of cinema that also leaves you … with the idea that there are some real issues out there that we ought to be thinking about — good and evil, and right and wrong, and heroism. Generations of people a long time from now will be enthralled by it, just as we are enthralled by the story of Robin Hood or King Arthur’s Court or any of the Shakespearean tales.”

The special unites a diverse group of high-profile Star Wars fans, from filmmakers to politicians to journalists. “The idea of the underdog who’s on the right side defeating the overdog who’s on the wrong side is a deeply American mythology,” says former Republican House Speaker Newt Gingrich, who climbed a high political fence to agree with current Democrat House Speaker Nancy Pelosi on the movies’ impact. Says Pelosi: “The legacy of George Lucas fits very comfortably among the classics of all time, whether ancient or modern. ”
Adds Lord of the Rings director Peter Jackson: “You don’t even have to ask, ‘Will it stand the test of time?’ It has and it will.”

This action-adventure film with lighthearted moments and touching purity, demands that we focus on current fundamental themes, including environmentalism, racism and the temptations of power and greed. As author Carl Silvio notes, at times the movies seem prophetic: “In Revenge of the Sith, when we hear Anakin say, ‘You’re either with me or against me,’ it’s almost impossible not to hear that quote and think of another very famous quote,” a point the special underscores with a clip of President George W. Bush’s November 2001 news-conference quote: “You are either with us or you are against us in the fight against terror.”

The dichotomies of good vs. evil and mechanism vs. humanity is apparent throughout the movies, which carry themes of politics and power. In the Star Wars universe, dictators are ruthless yet charismatic, and while some politicians are well-meaning, as Princess Leia Organa demonstrates, leaders are born from courage and conviction, not from gender.

With regard to other kinds of power, C-3PO and R2-D2 demonstrate that machines can be beneficial, while the feared Death Star shows us their danger. The Ewoks, instrumental in the eventual defeat of the Empire, remind us that natural, environmental solutions have as much as (or more) power than man-made ones. That the movies are fun only gives their central questions and observations more credence.

How long will that endure? “”A hundred years from now,” says Joan Breton Connelly, an associate professor of fine arts at New York University, “someone will be sitting here discussing the impact of Star Wars and they will be seeing different things in it than we are seeing today, just as today we have classes in the university on Homer.””
Filmmaker Kevin Smith: “It is bad guys versus good guys and everyone wants to see that story. That story will never grow tired, never grow old.”
Star Wars: The Legacy Revealed is produced by Prometheus Entertainment in association with Lucasfilm Ltd. Executive Producer is Emmy Award-winning filmmaker Kevin Burns (Empire of Dreams, Look, Up in the Sky!). Executive Producer for The History Channel is Beth Dietrich Segarra.