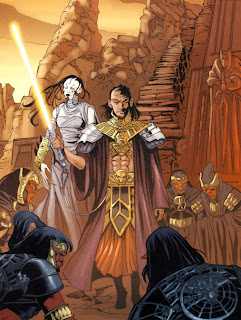 Yesterday we reported about Daniel Erickson clarification about the Sith Pure-bloods. We also promised to look deeper into this race, so here you go:

The Sith were a species of red-skinned humanoids that evolved on Korriban. They also had tentacle “beards” and all pure blooded Sith were almost always left-handed, and thus their signature weapon, the lanvarok, was adapted purely for left-handed use.

Society and Culture
Though they engaged in supposedly primitive practices such as sentient sacrifice, held a strong caste system, and were in an almost constant state of war, their civilization was quite sophisticated; they saw these acts not as cruel or barbaric, but simply basic aspects of existence. Their caste system included a meek and lowly slave class, a skilled and intelligent engineer class, the priestly Kissai class, and the warlike Massassi class. In later years, the offspring of Sith and the exiled Dark Jedi formed another class, from which most of the Sith Lords of the time came from.

Native Sith culture included the Sith language, the consumption of bloodsoup, a rigid and stratified caste-based society and live sentient sacrifices to the Sith deities. For the Sith, war and violence were just as much a part of the natural order of life as peace or serenity. Their social order was very rigid, and while many rose to the title of Sith Lord, only one, King Adas, attained the position of monarch. Another aspect of Sith culture, the creation of Sith holocrons to record knowledge, originates from their first contact with the Rakata of the Infinite Empire. 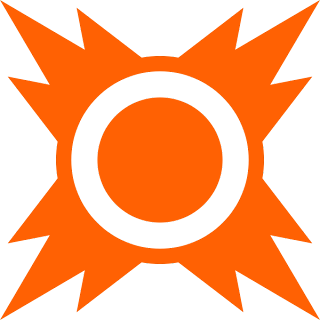 History
Sith society lasted as such for hundreds of millenia – from roughly 130,000 BBY to 7,000 BBY. Except for the brief unification of their species under King Adas, Sith society was fragmented, with many individual Sith Lords ruling indepedent fiefdoms, most of them attempting to claim Adas’ title of Sith’ari and unite their kind. The Sith species originated on the planet Korriban.
Circa 28,000 BBY, Adas, marked as a chosen one from a young age by his unusual black skin, united the nations of Korriban in violent warfare. He took the title of Sith’ari, meaning “overlord”, and was seen by his people as an immortal being who would rule forever.

Eventually the Rakata arrived on Korriban. Pretending to ally themselves with Adas at first and giving him the technology of holocrons, they soon revealed their intentions and attempted to conquer the Sith. Adas and the Sith fought back and drove off the forces of the Infinite Empire, with the king giving his life in the process. Without Adas’s strong hand, Korriban soon collapsed into civil war, with many claiming themselves Sith’ari. The massive infighting eventually forced the Sith to relocate their capital to Ziost.

Around 7,000 BBY, Dark Jedi exiles fleeing from the Galactic Republic after their defeat in the Hundred Year Darkness, established themselves as “divine” rulers over their native Sith, uniting the world once again, this time under the rulership of a Dark Lord of the Sith. Over the generations, the Sith interbred with the Human Dark Jedi through a practice of the intermixing of human and Sith bloodlines which became known as Sith Alchemy. Eventually, the Sith species in its original form was almost extinct.

During the Great Hyperspace War in 5,000 BBY, the Dark Lord Naga Sadow fled to the jungle moon of Yavin 4 along with a contingent of Massassi followers to escape the pursuing Jedi and the Galactic Republic. There, Naga Sadow committed cruel experiments on his own Massassi warriors which resulted in them becoming Dark Side wielding savages. 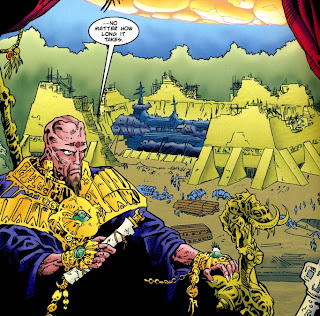 Due to their history of association with Dark Side Force users, the word ‘Sith’ went on to be used by many dark side organizations not connected with the original Sith species.