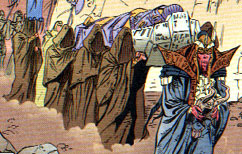 Daniel Erickson made another post on the official forums, giving a bit more explanation on the meaning of “Pureblood” in “Sith Pureblood”:

In the time of KOTOR, the Republic believed all of the original Sith Empire had been destroyed. Those who had not been killed were chased far into deep space where nobody had ever returned from. Thus Revan’s surprise when coming upon them and his dedication to going back to stop the threat when his memory returned.

That said, the Sith “Pureblood” in SWTOR are anything but pure Sith (from a species point of view). The name is a vanity. In the last 1000 years it has become clear that there is a direct correlation between those with enough of the old Sith blood in them to still be born with original Sith species traits (red skin, etc) and Force Sensitivity. While not any stronger in the Force than the more human Sith, it is extremely rare to find a “Pureblood” who is completely without Force Sensitivity. Thus those with the marks of the old Sith have come to call themselves “Purebloods” with the obvious insinuation that they are superior to those without. The more Sith species features (face tendrils, etc) one has, the more superior they can claim to be.

All of this is, of course, purely the realm of fashion and societal politics. While no non-Pureblood would stand up and say the entire claim was foolish (the Pureblood rate of Force Sensitivity is exponentially higher than those without and besides many of the Emperor’s inner circle bear the red skin) the majority of the Dark Council are not Purebloods. Showing that, in the end, talent and a lightsaber win out over bloodlines and a haughty pedigree.

We will go into more details about this race in our next species update.