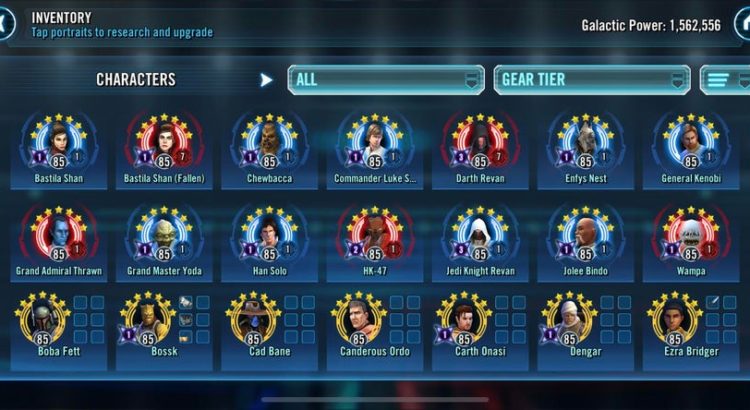 Next week they guys over at Capital games are planning to launch a client update to address some of the technical issues from the Relics Update in Star Wars Galaxy of Heroes . If you have been following the Dev Tracker, many of the bugs require a client update to fix and they need to do a full release to address them. Tentatively, they will start rolling out the update on 10/8 which means you can go to your app store to manually download the update once its available in your region or wait for the forced client update on 10/9.

Complete notes will be posted when the update goes live but here’s a list of potential fixes for next week.

“DISAPPEARING BUTTON BANDAID”
As we’ve indicated before, fixing the “disappearing button” combat issue has been difficult. This update will introduce additional logging in this release to help us better identify the root issue which should help us to resolve it in a future update. In the interim, we’ve introduced a short term bandaid, a “kickstart” if you will, to the battle system. If your buttons disappear in battle, we’ve introduced code to restart the battle system and refresh the buttons after 10-20 seconds (that’s at 1x speed). If you experience this bug and the game does not resume after this time period, please post on AnswersHQ, with as many details as possible. This will help us diagnose the exact issue, along with the new logging. Thank you for your patience in this matter.