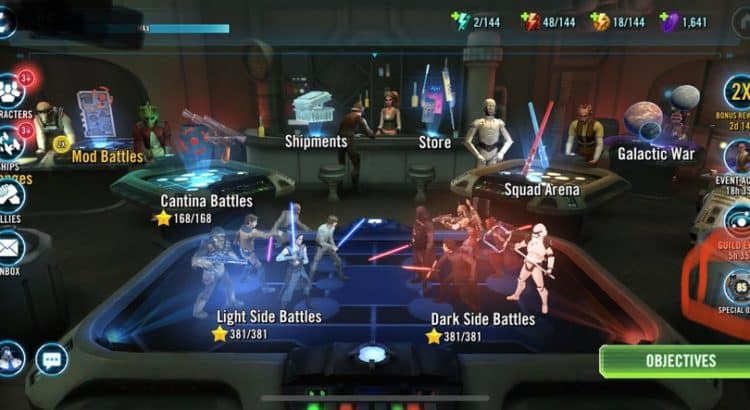 The Journey Guide is almost here! The guys over at CAPITAL GAMES have started the initial roll out and if everything goes smoothly, tomorrow they will update everyone’s client with the new features, new characters and several quality of life changes.

The Hyperdrive Bundle will be available this week and they wanted to give you a breakdown of the contents. Check out the video below for a brief overview but you’ll want to read through below to understand how the mechanics of this specific bundle works.

When we launched Galaxy of Heroes, player level 60 was considered the “end game.” Today, much of the end-game content is accessible starting at level 85. As the game has evolved, your collection is really what determines your progress in the game rather than your account level.

We’ve heard from many of you in previous Dev Q&A’s that it’s important we focus on improving the new user experience, and help new players in Galaxy of Heroes to get integrated into the game more quickly.

While we want to offer players a new way to get into the action, it’s also important that we respect the time and investment many of you have put into this game over the years. With those things in mind, the key pillars of the Hyperdrive Bundle are:

The Hyperdrive Bundle’s contents revolve around 3 main categories of rewards:

Units
The Unit category contains a mixture of characters, ships and capital ships that can be used to pursue Journey Guide units.

NOTE: Unlike other bundles which directly grant shards/blueprints of the units, the units from the Hyperdrive Bundle may be promoted up to the bundle values for the above attributes depending on a player’s pre-existing collection.
Resources

We wanted to set up new players with a base collection and resources so that each player who purchases the bundle can choose which characters they want to start investing in. We are still finalizing the specifics, but we are aiming for the Hyperdrive Bundle to contain up to 600k Galactic Power for a new player.

This bundle does not contain any shards or blueprints. Players will not collect duplicate shards or whole units; the Hyperdrive Bundle will instead conditionally merge characters and ships into the player’s existing inventory, taking the better star-rarity, gear, unit level and/or ability configurations from either the bundle or the player’s current collection. This allows the bundle to generate the best-case scenario for all of the included characters and ships without requiring the player to set up all 65 characters and 17 ships along with their associated gear and abilities (if applicable).

NOTE: Characters must first be activated and meet star rarity and character level requirements prior to equipping gear and ability materials. Players with less than the cumulative 145 shards required for a 5 Star character will be topped up to 145 character shards and the character will then be activated (if needed). Players who have 145 or more shards for a character, but have not yet activated that character, will have 145 character shards consumed as the character is activated and promoted to 5 Stars. Any remaining shards over 145 will be retained. A character that is already activated at 5 Stars (or higher) already exceeds the upgrade value and will not receive any further shard/star rarity benefit and any existing shards will be retained.

Let’s look at an example of how this might play out if a player’s character is at a lower level than the bundle:

Another example where the player’s collection already exceeds some of the values in the bundle:
Player purchases the Hyperdrive Bundle.
Player has already collected a specific character and its attributes are as follows:

Like other bundles, resources go directly to your inventory. For example, the bundle contains 100x Mk 7 Kyrotech Shock Prod Prototype Salvage and all players who purchase this bundle will receive these gear items. This is applied to all resources in the bundle.

Pre-level 85 players will have their level set directly to 85 – and all of the content that requires players to be level 85 will be unlocked for them.

We decided to make the nodes simmable to save players time since the early content in the game wouldn’t be challenging or engaging for players who purchase the Hyperdrive Bundle.

There are a new set of quests that are available upon purchase of the Hyperdrive Bundle. The point of these quests is to help new players who purchase the Hyperdrive Bundle to better understand the game. These quests reward resources needed to help advance characters (such as gear and ability mats). Some of the quests may be automatically completed for players who have been playing for a while (such as “have X 7* characters”). The rewards for those quests can be accepted right away.

We hope this helps you understand why we’re offering this bundle now – and how it’ll work. This is a lot of information, and I am sure there are plenty of questions here. Please feel free to submit questions related to this topic in our next Q&A.

We look forward to your feedback and good luck on the holotables!
Post edited by CG_SBCrumb on December 4