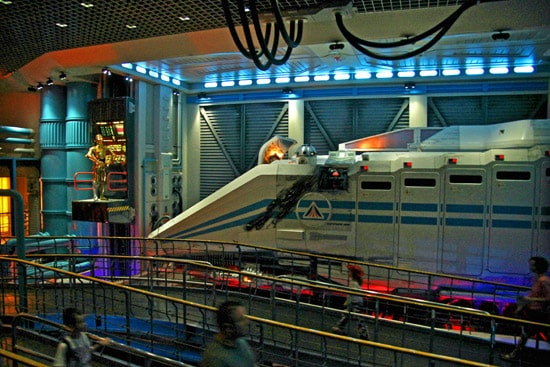 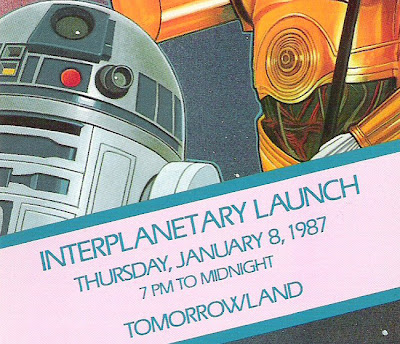 In an effort to update their image, the Disney Theme Parks, with permission from George Lucas, produced the world’s first motion simulator ride, Star Tours, which has been often copied, but never topped.

As opposed to a ride that goes somewhere or follows a track, Star Tours is a small theater that is bounced and jostled around in synch with a P.O.V. special effects film made by ILM where the craft flies through maintenance bays, meteors, and the famous death star trench. The effect is far more believable than it sounds.

The story is that guests are a commercial spaceport, boarding a flight to the moons of Endor, the que goes past several robots, including R2-D2 and C3-P0, repairing one of the shuttles.

The Shuttle is piloted by a first-time pilot robot, Rex who is physically there in front of the screen/window. The ship takes off to a rocky start, taking a wrong turn at the launch tunnels and flying through the maintenance bay, followed by light speed and a detour through a crystalline meteor shower. Then the craft stumbles into the middle of a battle between the Empire and the Rebellion, including Star Destroyers and the trench flight of the Death Star, then quickly returns home so the guests can be herded into the nearest souvenir shop to buy things.

In this video from 1987 Groups of visitors are taken on “Star Tours”, Thanks to an inexperienced and thoroughly incompetent robot pilot, what is billed as a leisurely tour to the Endor Moon becomes a wild ride as the tour gets caught up in a battle between the Empire and the rebels. We also get to see behind the scene footage, and an interview with the man him self Georg Lucas.