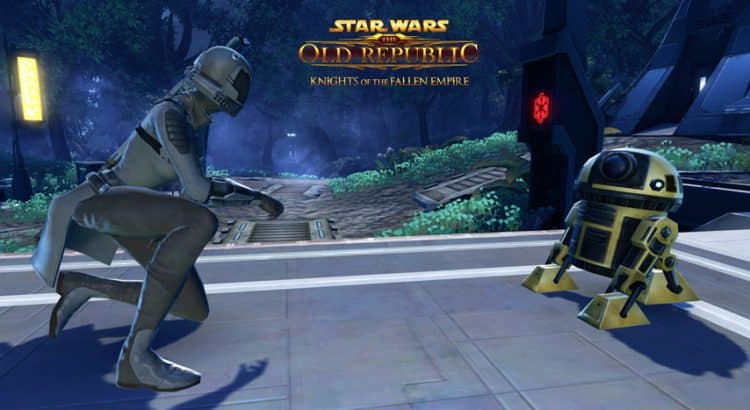 SWTOR players will be experiencing many contests and promotions for the month of May.

All Knights of the Fallen Empire Story Chapters FREE for Subscribers!

CELEBRATE MAY THE FOURTH!

Get your own Zakuulan Astromech Droid Mini-Pet*** plus Double XP!

Compete for a chance to win a Grand Prize Trip for you and a guest to Star Wars™ Celebration Europe!Enter by CLICKING THE “ENTER NOW” BUTTON BELOW and speedrun the entire 10 rounds to qualify.

Play through Chapter 13 for a chance to receive Collectible Zakuul themed Rewards!

SHOW AND TELL YOUR SAGA

Share your videos and screenshots for a chance to get rewarded

my country not included, why do you exclude some players from participating in this new contest ? i have been a subscriber for a long time and even when i’m not playing the game i stay a subscriber to support the game and this is the thanks i get ? you have an unhappy customer here and i’m sure there are other players who feel the same way

Country eligibility is definitely a question we have seen quite a bit, hopefully I can lend some insight. In most cases, the reason a Country would be eligible/ineligible is dependent on their respective rules. Each Country has their own rules depending on the type of contest, the individual prizes, the dollar value of those prizes, etc. If your Country is ineligible for the contest, it is likely due to our inability to meet the requisite criteria for Contests and Promotions and we’re either prohibited from offering the promotion in your Country or limited in what actions we could take. Please be aware we are constantly reviewing these types of rules and working with relevant internal teams to expand the number of Countries that can participate.

We apologize if you’re ineligible, our intent will always be to include as many Countries as we can. I hope that clears up any confusion. Thanks!

I’m kind of confussed exactly what we’re supposed to do. Take a video while we play through chapter 13 and email it to SWTOR? Take screen caps? Or just play and see if you’re picked a winner? I have 11 toons I take through each KotFE chapter every month.
I’d be playing the chapters whether there was a contest or not, but the way to submit confuses me.

You only need to do two things!

We will be drawing 5 random people who are entered in the contest, that completed 13, at the end of each 5 day period.

Does this mean that if you complete Chapter 13 by the 10th you’re only eligible for the drawing for the 10th, or does completing the chapter make you eligible for all the drawings after you’ve completed chapter?

If you complete Chapter 13 on the 9th, you are only eligible for the drawing on the 10th.
-eric