Still days before the official launch of SWTOR, we hear reports of people reach max level already. There are a few level 25+ in my guild already and they all have jobs and/or families and other responsibilities. At least a couple of them will reach 50 easily before December 20th. 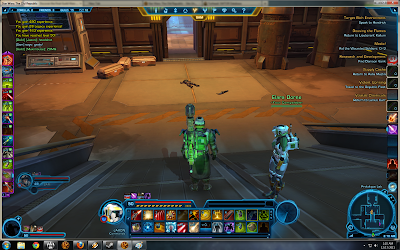 Some replies commented that he was not actually the first to 50, with one saying, “There is a level 50 on Lord Adraas (an RP server beat you!) that was max’d before this.”

Either way, it’s safe to say Jaxon was probably in the top 10 to reach 50 in the United States. This does bring up a good point, however, as we read the comments and we see that some “haters” just don’t care much for those who reach the level cap so quickly and then brag about it to boot.

But is it really such a big deal if that’s how another player wants to play the game? Some players who game tested may already be familiar with the storyline and perhaps just wanted to get one character there quickly before playing another story. Then there are those gamers who love playing MMORPGs for the challenge of seeing how quickly they can reach max level and even trying to beat their own character level times. I really don’t see where it does any harm if this guy wants to level his character quickly.

For me, it’s not a race (on my first toon anyway) and I want to enjoy the storyline and explore the game. However, in my WoW days, once I had several max level characters already and had been playing for years, I practiced the maximum route to level cap in the least amount of time. I did not stop for anything and didn’t log in unless I was leveling the toon. It was fun to beat my previous personal records for “fastest level”. It’s just something else to do. I imagine we will continue to see players do this sort of thing in SWTOR, too.

As for Jaxon and the others who have reached level 50- congratulations! I hope you go on to continue to enjoy the game and level more toons.