SWTOR is quite possibly the most anticipated MMO ever, but what about those gamers who don’t really dig the MMORPG scene? Could there be something else in the works for Star Wars fans? 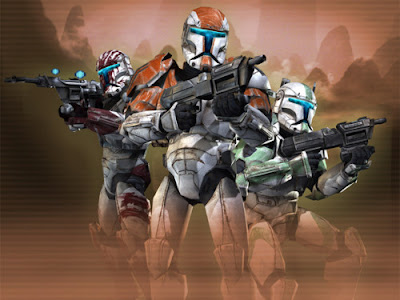 If you remember, we recently wrote about Lucas Arts getting the license for Unreal Engine 3 from Epic Games but no one has any idea why, right? Well could it possibly be for a Star Wars Republic Commando Sequel?
It’s been on our wish list for years but recent news developments say it just might be true.
I’m a big fan of first-person-shooters: a long time admin of some of the biggest TF2 servers and a Counter-Strike girl since before the hackers took over. :p I played Battlefront and while I enjoyed it, the game just didn’t quite hit the standards set by other shooters.
But Republic Commando, now that was an excellent shooter with a Star Wars theme and I greatly enjoyed it. I would be 100% into a sequel for Commando and a continuing series of clues says this might be in the works. Of course, it’s all heresay at this point but I believe it could be feasible.
Tim Longo, director of Tomb Raider (which I also love) and Republic Commando has recently signed with LucasArts and left Crystal Dynamics to supposedly work as creative director on an unannounced project. When you add this to the news that LA licensed Unreal Engine rights and we just might have the makings of a Commando sequel in the works.
What do you think? Should there be a sequel to Republic Commando? Do you think this might be it or do you think the secret project is something else entirely?
0
SHARES
ShareTweet