“This is it. No more delays. No more mystery. The novel I’ve been working on has been officially announced. The title pretty much says it all: Revan.” – Drew Karpyshyn on his blog, about his new book. 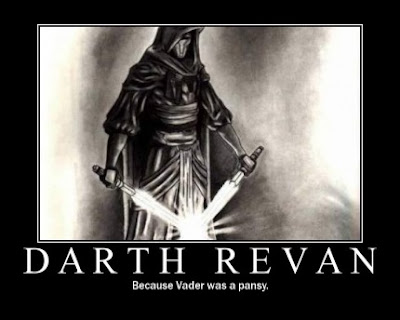 Drew Karpyshyn has a brief Q&A on his site about the upcoming book Revan, which we wrote about before. Karpyshyn himself realized the extreme scrutiny he would be under by some hardcore fans. He says in his blog, “I realize in taking on this task that I’m opening myself up for a lot of potential criticism from the KOTOR and Revan fans.”

Boy do we understand that Drew!

So he decided to address these concerns in a Q&A on his blog. Some issues addressed include:

What do you think? Were you a KOTOR fan who will be reading the book? Are you concerned that reading Revan’s story will ruin your memories from KOTOR?

Personally, I think it’s just a story. When you play, you played your own version of the story and Drew wrote his version. It’s fiction and it’s for fun so relax. Your good ‘ol KOTOR memories aren’t going anywhere. You can still appreciate the book while savoring your own memories of your Revan.

As for the book, it’s in the hands of Del Rey already which is exciting news for Star Wars fans. I, for one, cannot wait to see what he has done with this story. Del Rey Books has already published two novels in the Old Republic timeline, Fatal Alliance and Deceived, and they announced last year that there would be a third Old Republic novel, so here it is!