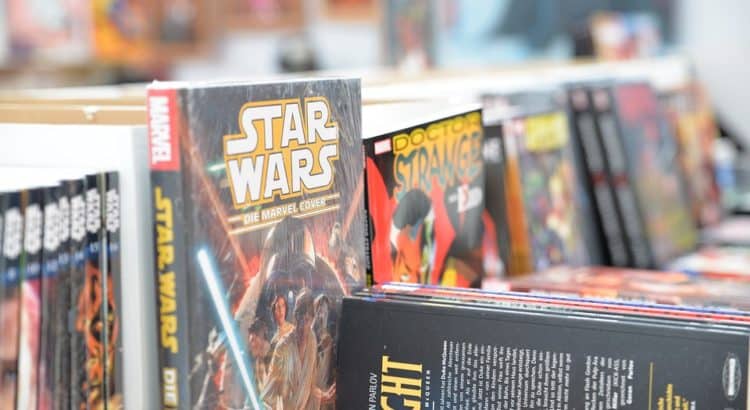 There are a lot of great causes a celebrity can get behind to gain some cultural cache. Some opt for an important charity like UNICEF. It’s hard to argue with that! It’s a solid move and an endearing gesture that demonstrates a celebrity cares about something more than… well… their continued status as a celebrity.

But fandom is a more tricky exercise. After all, some might argue that celebrities aren’t supposed to be fans — they’re supposed to have fans. But Star Wars is different, somehow. It’s iconic. So much so that many celebrities have stepped out of the limelight to don a novelty Jedi outfit and pledge undying fealty to the great Creator Lucas and all the amazing stories that have found life in his Star Wars universe.

Let’s start with the “dark side” of the fandom force. Alex Becker is a YouTube celebrity. His brand of digital entrepreneurial advice is hard-hitting, incisive, and not averse to cutting through the hype. His money-smarts aside, that fearlessness is what earns Becker followers.

It’s probably not all that shocking then that his ardor for the Star Wars universe revealed its gritty underbelly in the lead up to the release of Solo: A Star Wars Story. So what was Becker’s beef? Basically, he felt that The Force Awakens and The Last Jedi had literally lost the plot; that they were too fixated on political correctness; and that the new storyline tore down much of what many Star Wars fans admired and loved about the universe.

In his own words, “You have the greatest franchise of all time, you have the keys to something that has brought more people together in a cinema… Your last few movies have intentionally taken that away. It’s made certain people feel left out.”

Kevin Smith is best known for his sharp talent for creeping horror and his irreverently edgy comedy. At first glance, he’s probably not the kind of guy you’d associate with the hardcore fandom of any kind, let alone for geeking out about stories that happened a long time ago in a galaxy far, far away.

Yet in 2015, when he visited the Force Awakens set, he reportedly became visibly emotional, tearing up and appearing overwhelmed to be there. He later said, “the moment I stepped on the Millennium Falcon 10 years dropped off my life.”

This is the thing about Star Wars. It’s a disarming. Jaded people suddenly go gooey-eyed over a universe they fell in love with as a child.

A self-confessed late adopter, Radcliffe admitted to catching the original Star Wars trilogy only a few years ago, but he redeemed himself by enthusiastically embracing the universe once he’d found it.

Radcliffe chose Boba Fett as his cosplay character of choice and adorned himself in full Fett regalia on a Halloween edition of the Ellen Degeneres Show. He looks deeply, existentially at ease in the battered costume of a space-mercenary. He wears it well.

Rainn Wilson gave off a decidedly geeky vibe as Dwight Shrute in The Office (although he was very clear about being a Galactica guy). Still, the level of his ardor was a tad surprised when he showed up to the Force Awakens Premier dressed as a bespectacled Jedi, complete with highly phallic light saber jutting atop his impressive Jedi-paunch.

Promo shots tell an odd and incongruous story, with Wilson staring unsmilingly (and it has to be said, in highly Shrutish fashion) straight down the barrel of the camera. He gives the impression of a guy who isn’t cosplaying a Star Wars character. He’s a Jedi and he damn well knows it.

The interesting thing about Grande’s fandom is that she chose to weigh in on perhaps one of the most contentious Star Wars issues of our time: did Han shoot first? In one of her many videos, she stated her view in no uncertain terms: “Ugh, God, you’re both wrong. Han didn’t shoot first because Greedo never fired off a shot in the first place. Han shot, Greedo died, end of the story.”

Her blunt analysis belies a heavily pragmatic perspective on this anti-hero, but it also says something about her as a person. It doesn’t matter who shot first, she contends. What matters is who won.

In 2015, Gordon-Levitt showed up to the Force Awakens premiere wearing green face paint and a white robe. It was a crude Yoda cosplay attempt, but there was something beautiful and self-effacing about his decision to cosplay one of the least sexy characters in the Star Wars canon.

He also was given the chance to make an appearance in The Last Jedi as Slowen Lo — not that you’d recognize him beneath layers of animatronic accouterment.

It’s probably significantly less surprising that Simon Pegg is a Star Wars fan. There’s something endearingly space-centric about the guy. Of his attraction to Star Wars, Pegg said, “I can mark out my life in terms of my relationship with that film.” As exhibit A of his passion for all things Star Wars, he points out that he wrote a student thesis on Ewoks. Hard to argue with that.

Pegg has also been a strong advocate for using practical effects and good old fashioned puppetry in the Star Wars movies.

Star Wars gets to people, and though it’s sometimes easy to forget it, big glitzy stars are people too. From cosplaying Yoda to endlessly analyzing the cultural ways of Ewoks, celebrities are clearly as besotted and geekified by the Star Wars universe as your garden variety anonymous geek. There’s something comforting in that!