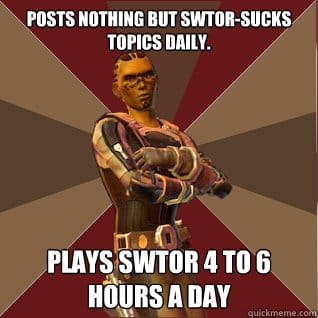 A lot of people keep talking about SWTOR like it’s a failure but that’s really not the truth. So why do so many people seem to have this perception about SWTOR? As I explained in my recent post, SWTOR’s Cartel Market Rakes in $139 Million Dollars in 2013, one reason for this is that many people mistakenly associate a game going from sub to F2P as a sign that it is failing. But that’s not always the case. It really just means that a different pay model was needed and now that they have it, BioWare seems to be doing very well with SWTOR financially.

If you spend any time around the gaming communities, you will notice people talking about how SWTOR is a failure or making reference to how some other game is going to be a failure “Just like SWTOR” but no one can give you any real proof of how the game has failed. There is a lot of speculation and hearsay but when you really break down these complaints, none of them seem very valid. They whine or moan about problems that existed just after launch or even beta. But in the two years that SWTOR has been out, there have been many changes and updates. Most of those complaints are null and void in today’s SWTOR.

SWTOR actually has plenty of populated servers, regular content updates, an interesting endgame to keep the hardcore players occupied and most of the issues that the game had in the beginning stages have now been corrected. A failing game doesn’t rake in $139 million in cartel market sales ALONE- not counting subscriptions.

But to hear some people talk about it, SWTOR is still a failure.

So does it all fall back to that belief that once a game goes F2P, it’s a failure? Because there are actually many successful F2P MMORPGs out there today.

Or maybe it’s just because MMORPGs as a whole are on the decline? People just don’t seem to be investing the same amount of time into them that they did in the past.

What do you think- why do people talk about SWTOR like it’s a failure?