Three simple words, and yet they mean so much more. The issue of whether Greedo or Han shot first is one of the most contentious in the Star Wars universe, and has come to represent for some the fractured and frictional relationship between Star Wars purists (i.e. those who wholly invest in the original versions of the original trilogy as the be-all-and-end-all of the franchise) against the new-bloods. In some ways it is also indicative of the love/hate relationship fans have with George Lucas, and an analogy for the two perceived versions of the director (old and new). And one thing is for sure- none of the die hard fans who debate the issue endlessly are going to be quietened on the matter any time soon.

And now Paperclip Films have released a video petition via YouTube addressed to Mr Lucas, in a bid to have him re-address the crimes of his 1997 edit. This guy talks sense… 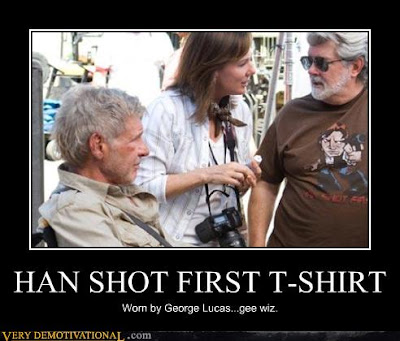