Cool interview with Jonathan Crow, with some insight into what they keep tabs on. Quite an enjoyable read. Man would love to see the queries he runs on all that sweet sweet data he has access too.

What does a typical day look like for you?

Most days I work on two activities:

1. Monitoring the health of the game via a series of dashboards that we developed to track some of the important key performance indicators for the game (keeping track of daily logins, game economy, engagement in Operations and Warzones, etc).

2. Working on deeper-dive analyses associated with specific areas of play (such as comparing player deaths to boss kill rates between Operations) to help the development team assess whether a certain feature or piece of content needs to be modified to maximize the engagement and enjoyment of the player base.

Since Terror from Beyond is top of mind for a lot of people, why don’t I share a few stats about it? One of the charts we use as a means to gauge engagement in various areas of content is the % Area Time Spent chart. The chart below shows the percent of time level 50 players spend in each major content area in the game. You’ll notice two changes in this chart. The first is a major spike in time spent on planetary content around mid-August and another is a spike in time spent in Operations post Game Update 1.4 (which is when we released Terror From Beyond). When we released the Grand Acquisitions Race, we had a huge influx of level 50 players on Nar Shaddaa, Coruscant, and Dromund Kaas as they went about collecting tokens and completing missions so they could get some of the fun event stuff like the new pet and the Sand People moddable gear. This event had the desired effect of getting people to leave the Fleet and go run about the galaxy mingling with other players of various levels. More importantly, on September 26, we released Terror From Beyond. The result was a significant spike in the number of level 50 players spending time in Operations, which again was our desired effect. What’s even better is that this trend has been sustained for a month so far. We’ll be keeping an eye on that to see what the long term effects are.

Check out the graph below, and read the full story here. 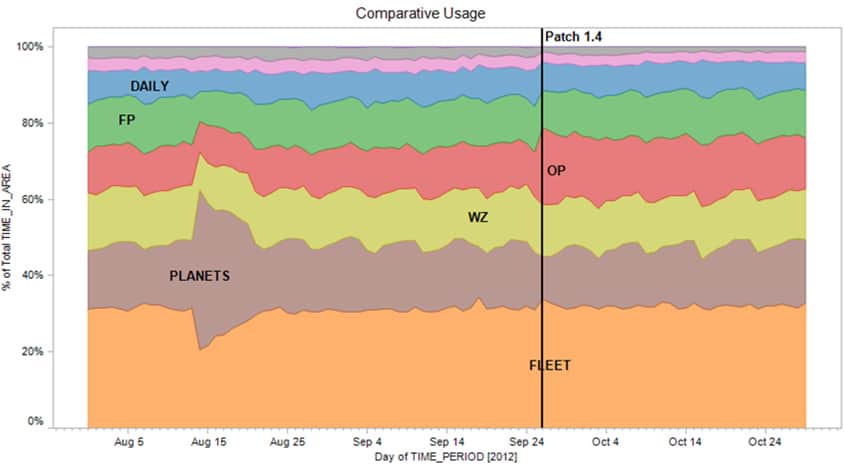