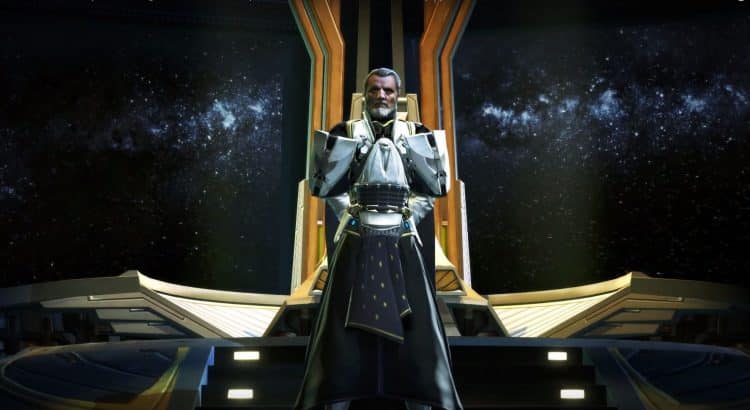 Earlier today, current lead writer of Star Wars: The old Republic, Charles Boyd took on the forums explaining  the backstory of Knights of the Fallen Empire

One of my absolute favorite lines from the vanilla game is when you encounter the Emperor in the Jedi Knight’s story and he gives his big villain speech about out why he wants to be an immortal god:

That is a villain I can easily believe was already spending centuries of his ageless life building Zakuul – exploring what it was to build a “perfect” society where he was a beloved ruler (and even as close to ‘benevolent’ as he is capable of), and exploring what it was to fall in love and have children. (Which, of course, he is terrible at since the guy is legitimately evil to the core as we already knew.)

Hey, that’s the line I was going to quote!

Since Valkorion is one of the biggest discussion points lately, and it’s been a while so I feel like it’s free range to discuss, I’ll just lay out everything we had in mind for Vitiate/Valkorion and y’all can have something concrete to discuss and/or kick me about

Centuries before our story begins, Tenebrae becomes Vitiate, becomes Emperor of the Sith, and leads the survivors of the Sith into exile to Dromund Kaas. He rules directly for many years.

As years go by, he becomes more and more dissatisfied with the Sith Empire he’s created. He finds himself increasingly distanced from the Sith philosophy that first brought him to power and sees it as a dead end (as he expresses several times in KOTFE/KOTET) and, with the immense power at his disposal, begins striking out in search of something better. This is when his “long periods of silence” begin.

He discovers Zakuul, which is in a comparatively primitive state (by Star Wars tech standards, anyway) and dominates Valkorion, as he describes in KOTET Chapter 2. He learns the ancient legends of the gods, of the Eternal Fleet, etc, and investigates them with his considerabe resources. By this point, he has certainly already started the collection of rare and powerful technologies and artifacts that we find in the Arcanum, his vault on Nathema, etc. He (or perhaps agents working for him, such as the Servants) finds the Eternal Fleet disabled in deep space and is able to seize control of it (based on how ARIES talks, we can be fairly sure that neither Valkorion nor his agents ever visited Iokath itself).

The technology of the Fleet helps him raise Zakuul still further. In his Valkorion persona, he constructs a more stable society that he finds more interesting, one that has more potential to let him explore different experiences for centuries to come (his quote above and his many claims of Zakuul being the bestest thing ever). So now, he just needs to ensure that he’ll live forever, and that nothing else will threaten his new creation. The ritual (the one the Jedi Knight ultimately stops) will serve both purposes, so he sets that plan in motion, kicking off the Great Galactic War between the Sith Empire and the Republic. (I don’t think it’s much of a stretch to believe that he could avoid destroying Zakuul, which is waaaay out at the outer edge of the galaxy, when using a ritual that he himself is creating over many, many years, but that should’ve been something we at least let Jedi Knight players ask.)

Then, Vitiate abruptly stops the war, proposes a treaty claiming seemingly-random planets, and starts the Cold War. An obscure step in his plan to complete the ritual? Makes sense, though if we look at how old Valkorion’s children appear to be, they’d be getting born right around this time... coincidence?

Senya tells us that Valkorion started becoming colder and more distant as the children grew up, so we can surmise that he’s splitting his attention again during this period. The assault of Sel-Makor and the final attack by the Jedi Knight take a lot out of him. His ritual is thwarted, and he is too weak to dominate another body or risk Valkorion until he’s reinvigorated by Revan’s plot in SoR – otherwise, he would’ve surely done so. He could’ve used the Fleet to cause the necessary deaths, but he wasn’t ready to reveal its power to the galaxy yet – more on that shortly.

The events of Shadow of Revan give him the boost he needs to become active again – and he does so in spectacular fashion on Ziost, all while playing up his “evil destroyer of everything” Vitiate persona to the max. He’s greatly reinvigorated, he’s dealt a significant blow to the Sith Empire (which had been rapidly increasing in strength after Rise of the Hutt Cartel), and he’s baited the player and their allies in one fell swoop. All of which leads inexorably to the confrontation in the throne room in the beginning of KOTFE – but why?

For this, we just have to look at the last person who ever stood up to Vitiate at anywhere near the level that the player’s character did on Ziost: Revan. When Revan took a crack at him, Vitiate locked him up for centuries, picking and prodding at his mind the entire time. So we know that Tenebrae/Vitiate/Valkorion doesn’t destroy people who are a legitimate threat to him; he’s fascinated by them. He entraps them, studies them, manipulates them, and corrupts them. (He did it to Vaylin, too! And Dramath!)

So, to review: Valkorion has been revitalized; he’s got a tremendously powerful fleet; he’s got the Republic in the weakest state it’s been since the treaty of Coruscant and the Sith Empire not far behind; he’s discovered a new threat that can actually take a shot at him; and he’s got a wife who’s left him and children that he finds deeply disappointing (see pretty much any time he ever deigns to speak to them) in line to take over his supposedly perfect society. Time to solve all of his problems at once!

He spurs his son’s bloodlust and ambition by setting him and the fleet loose on the galaxy (now that they’re definitely in no state to resist the fleet’s power or endanger Zakuul). He lures his new enemy into a trap and captures them. He arranges his own “death”, whether by the player’s hand or Arcann’s, and invades the player’s mind. Arcann and Vaylin do exactly what he expects, which is to generally muck up the galaxy and establish themselves as tyrants in need of overthrowing. And then he arranges and guides the player in doing just that, all the while laying the groundwork for dominating their mind at the moment of their victory and commanding a newly-reshaped galaxy as a heroic liberator – an all-new experience to try out. Too bad it didn’t work out for him

So, all of this leads to a perfectly reasonable question: why didn’t we just come out and say this in the game?

So, there’s my giant post about Tenebrae/Vitiate/Valkorion and our reasons for going about it as we did. Having a reason to do something doesn’t make it the right thing to do, of course, so I’m happy to hear everyone’s feedback and take it in mind going forward. But, as usual, please be cool about it and be respectful to one another

we may need a different lead writer

It’s treason, then!
Though as others have clarified, I haven’t been the Lead Writer since late 2015