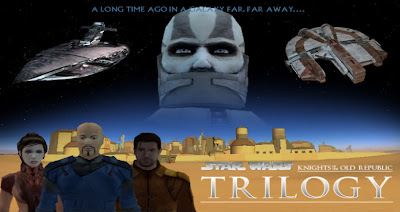 Sooo you haven’t played the best game ever made, And you still want to play Star Wars: The old republic. Ohh well.. Over the next few weeks you get the chance to understand the full back story as we show you the games cut together as a movie.

Sorry about the popups. It’s not our site, but the nice people hosting the movie having their way. Guess it’s a small price for watching a two hour long movie for free.

Hopefully we will have part 2 up by the weekend.

Update:
From the comments section:

Kevsmets said…
I actually am the creator of this movie… Episode 2 is finished as well… we have a whole forum community if you want to check it out, plus a youtube page and even a streaming channel called KOTOR TV! Forums: http://z11.invisionfree.com/KOTOR_Movies/ Youtube home: http://www.youtube.com/user/kevinsocal2k6 KOTOR TV: http://www.livestream.com/kotortv

Star Wars: Knights of the Old Republic (KotOR) is a roleplaying game made originally for the Microsoft Xbox and later released for the PC. The game was developed by BioWare and published by LucasArts for Xbox on July 15, 2003, for PCs running Microsoft Windows on November 19, 2003, and later for Mac OS X. Set 3,956 years before A New Hope, Knights of the Old Republic covers the era just after that of the Tales of the Jedi comics, the time of the ancient Galactic Republic.
KotOR is the first computer RPG set in the Star Wars universe. It uses the d20 System, from the Wizards of the Coast Star Wars Roleplaying Game rules. The game also allows the player to either be a servant to the light side of the Force or the dark side, using an alignment system that tracks actions, from simple dialogue choices to major plot decisions. Combat is turn-based. Time is divided into discrete rounds, and combatants attack/react simultaneously. However, the number of actions a combatant may perform each round is limited. While each round’s duration is a fixed short interval of real time (around six seconds), the player can configure the combat system to pause at specific events or at the end of each round.
A sequel—Star Wars: Knights of the Old Republic II: The Sith Lords—was developed by a different studio, Obsidian Entertainment, using an updated version of the engine from the first game. Bioware was occupied with producing Jade Empire and wanted to focus more on their original productions than licensed games, but they recommended Obsidian for KotOR’s sequel. It was released for Xbox a year later, in December 2004, and PC in February 2005.