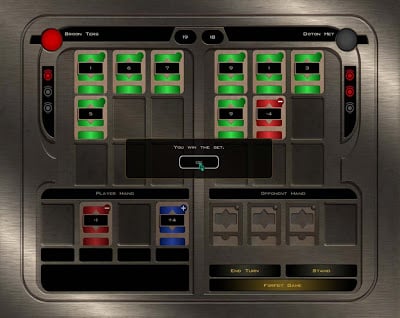 Pazaak, an ancient game dating back to Old Republic times, was a popular card game in which the goal was to reach 20 without going over, or at least come closer to it than the opponent. The player with the nearest sum to the number 20 won the round, and the player who won three rounds won the match. If in one round the scores of the two players were equal, the round was not counted at all.

Gameplay
There are three different decks in pazaak: the main (or “table”) deck, composed of cards numbered 1-10 (the total cards in this deck is unbound, though it tended to have four of each number). There was also one side deck for each player in the game. These decks would be assembled by the players themselves and had to have exactly ten cards.At the beginning of the game, each player would randomly select four cards from their side deck, making up their Hand. Then the first turn of the first player would start. The player would draw a card from the main deck and play it on the table. After that, the player could choose to either place a card down from their hand, or to end their turn. Only one hand card can be played per turn, and no more cards are ever drawn from the side deck.

When ending his turn, the player had two options:

End Turn: If the player ends their turn, they are bound to draw a new card from the main deck at the start of the next turn. This is repeated until either they stand, go bust, fill the table, or their score is exactly 20.

Stand: If the player stands, they keep their current sum till the end of the set and do not play any other cards. The opponent, however, can still continue playing cards, unless he has chosen to stand as well. Getting a sum of 20 automatically causes a player to stand.

Once his turn was over, play moves to the next player, and their turn is played in the same manner. Play passes between the two players until someone wins the set. 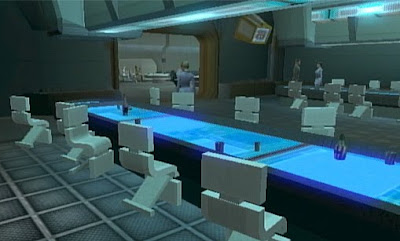 The cards
There were two decks used in pazaak:
The Main Deck consisted of four sets of cards numbered 1-10

The Side Deck consisted of ten special cards chosen by the player before the match. At the start of each set, four of these cards were chosen at random for the player to keep in his hand and play at any time he desired.

The side deck also had a variety of cards, and each deck was unique to the player in that he could purchase different types of cards throughout the galaxy and choose whichever ones he preferred to keep in his hand. There were two types of such cards: Plus and Minus cards, which were blue and red, and Advanced cards, which were gold. Main Deck cards were green, or in some older cases gold.

Plus Cards were blue cards that added the written value to a player’s total when played. The value of the cards ranged from 1 to 6 points.

Minus Cards were red cards that were similar to the plus cards, but instead they subtracted their value from the players total. They also ranged from 1 to 6.

Plus or Minus Cards (+/-) were essentially a combination of the two; the player could choose upon play whether he wanted to add the number or subtract it from his hand. These were the most expensive and highly valued cards. They also ranged from 1 to 6.

The Tiebreaker Card was an extremely rare card that acted like a +/-1 card, but in the event of a tie, the player who played the tiebraker card would win. A tiebreaker card was owned by the being on Nar Shaddaa known as the Champ until he gave it to the Exile after losing his position to the Jedi.

The Side Deck was often the key to victory, as without his hand, a player relied solely on luck to win the match. Therefore, a player would have to conserve his cards, as the four side deck cards would have to last him through the entire match.

There were three ways to win the set:
By outscore: After both players chose to stand, the player with the greatest score would win, provided that it was not over 20.
By going bust: If a player ended his turn with a score over 20, he was said to “bust”, and the other player won.
By filling the table: In some rare occasions, if a player could place 9 cards on the table without busting, he would receive an automatic win. He would still win if his score was less than the opponents, and even if they were tied.
In the event that a set is tied, no one gets a point for the set, and a new set is played. The first player to win three sets won the game, and whatever money was being wagered.

Areas of play
As a card game, pazaak could be played just about anywhere, but the most popular places to play were on ships during hyperspace transit, at the local cantina, or at special areas designated for play, such as the Pazaak Den in the Nar Shaddaa Refugee Sector.

Alternate rules
When played just to waste only time (and not money), pazaak players used Republic Senate rules, in which nothing was bet and no one came on top. The name was mockingly derived from the way that bureaucrats babbled on while taking no risks and accomplishing nothing. There was also a Nar Shaddaa version, in which the players are removing clothing.

Alternate uses
Like all games, pazaak quickly became a form of gambling, and most players in the galaxy wouldn’t even talk to someone before discussing the wager. Many people still played Republic Senate Rules, and Nar Shaddaa rules, for fun, however. A Force sensitive man known as Atton Rand often used pazaak to block out anyone who tried to read his thoughts; he would pretend to play the game in his mind, so that if anyone tried to read his thoughts, all they could see would be pazaak.

One thought to “How stuff works: Pazaak”