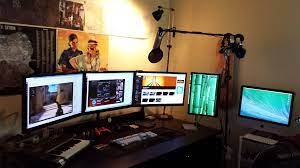 Playing video games is now possible to do as a job. Rewind to a mere twenty years ago, and that statement would have sounded ludicrous. Any child that uttered any notion of doing it as a paid job would be met with amusement. Today though, those dreams are a reality, and it is easy for people who are in love with gaming to turn their passion into a full-time job. The most skilled players can compete in massive virtual tournaments that offer staggering prize pools, but only the best of the best can win high amounts of money. Those interested in a more relaxed experience can still earn money from playing games, in one of two ways.Ever since video games came out people wanted to record their best gameplay moments and post them on the web for other gamers to appreciate. Many of these clips would never see the light of day as there was not a central video sharing site to host all of them. That all changed when YouTube entered the scene in 2005. It was an instant success and very popular, meaning that players could get their gameplay seen. The more business-savvy among those players realised they could make a channel dedicated to gaming to earn a profit, and so the content creation platform was born. This would see players recording themselves playing games and then uploading them as videos on YouTube for their audience to watch.

Despite content creation being an established method for earning video games, the act of live streaming has soared in popularity in recent years. This is mainly because of the creation of Twitch, the dominant streaming platform which launched in 2011. Twitch differs from YouTube because it is dedicated to live gameplay, compared to it being pre-recorded. Players can play games in front of a live audience, and they can also interact with them through the chat function and on-screen notifications. Streaming has become so popular that it has phased into other industries, most notably the gambling sector, where people can play at live dealer casinos, which is indicative of the growth the platform has experienced.

When comparing the two options, clear differences arise. The factor that may interest most is the earning potential of the two. YouTube operates on a view model, meaning the more views a video has, the more money the creator will earn. Twitch instead has a subscriber model, which sees gamers earn a percentage of a monthly subscription fee. Despite this difference, a simple fact remains – the bigger the audience, the more money is made.

There is also the question of interactivity. Content creation can prove to be a lonely experience for some and pales in comparison to streaming, where the streamer can talk to their audience and answer questions live.  YouTube does have a comment section where the uploader can respond to comments, but this is always after the video has been published.

It will come to the delight of gamers worldwide that it is possible to make a career out of their favourite hobby. However, after reviewing both career options, it seems that live streaming games is the best way to make a living from playing video games.