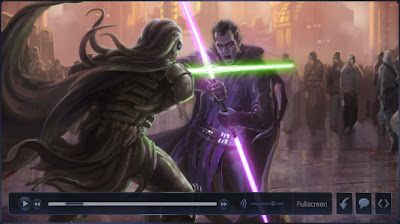 Since the Friday update  there have been a couple of developer posts on the official forums related to the subject. First is one by Rob Chestney, who comments on KotOR2 in relation to SWTOR:

Hey Folks, always nice to see the healthy debate sparked by the Timeline pieces. I love Star Wars history and particularly anything relating to KotOR. Even though KotOR 2 was developed by another developer, lots of folks at BioWare played and enjoyed it, including myself. If you look closely within the game, you will find several references to events or characters from KotOR 2, and we absolutely treat it as canon. I will also say that there have been discussions about the final fate of the Exile, who was indeed a woman according to the canon.

When outlining the Timeline series, though, we skipped over the events of KotOR2 for a few reasons:

Essentially, what happened in KotOR 2 is that a few years after Revan disappeared, a new trinity of Sith Lords materialized and drove the Jedi into hiding. Kreia (aka Darth Traya) sought out the Jedi Exile, and sought to use her as a mechanism for destroying the Force itself. The Exile defeated the Sith Lords, foiled Kreia‘s plan, and disappeared into deep space searching for Revan. The galaxy was essentially returned to the same state as it was in before the events of KotOR 2.

A few things about this: first, it all happened behind the scenes; the Jedi of the TOR era don’t even know what really happened, in fact the only people who ever knew were the Exile and her companions. Second, because the events of KotOR 2 didn’t really change the political landscape of the galaxy in any significant way, it’s really more of an historical footnote to the Jedi Civil War rather than a major event in its own right.

This is absolutely not to say the story of KotOR 2 wasn’t important. Taken in the context of the Timeline series, however, we decided it would be confusing and that the next note in the history of the galaxy should be the Jedi Civil War.

Thanks for all the feedback and interest in the game and in the Timeline videos. You guys remind us of why we’re doing all this, so keep it up.

I just hope that when he says that the Exile was a woman according to canon he’s just talking about canon and not about SWTOR, because otherwise they’ll likely also have Revan only as male in the game, and that would ruin the continuity of the story for me. I’ve long held that in a game they don’t have to keep to a single canon and can keep things flexible (much like how in KotOR2 the game asks you what gender Revan was and then represents events as if that also was the truth of it). For me Revan was a woman and it would be extremely disappointing if that changed (and similarly I can see how it would be similar for those for whom the Exile was a man, not that anyone really seems to care much about the Exile anyway).

The other post is by Daniel Erickson who talks about marriage in the Jedi Order:

How rare that I see a question I’m allowed to answer!

Following the decimation of the Jedi Order as revealed in Knights of the Old Republic 2, the Jedi were forced to bend and rethink many of their restrictions in order to rebuild. There is no denying that Force sensitivity can run strongly in particular bloodlines and so for a brief period of history it was allowable to romance, marry and have children much like anyone else. After a series of horrific feuds and padawans lost to the dark side in the following century, however, the Jedi once again tightened their rules. In the time of The Old Republic it is permissible to have children and even to marry within the order but only with direct permission from the Jedi Council. To be granted permission the Jedi must prove a perfect detachment and serenity, basically that he or she does not care more about their prospective spouse or parent of their child than they do about any other Jedi. Permission is very rarely granted but the rule has become something of a release valve, both relaxing the order from the oppression of earlier years and often bringing budding romances to the surface so they can be dealt with by Jedi Masters.

I still have to scratch my head over how much difficulty the Jedi seem to have with the whole concept of love. But then that’s always been backwards about the Jedi Order; I simply can’t see their ‘perfect detachment’ of ever coming to anything good (the Sith take the opposite to a whole other extreme though). It doesn’t help that the prequel movies which were supposed to show the dangers of romantic attachments (as that’s supposedly what led to Anakin’s fall) so completely botched the whole thing. I don’t think anyone can realistically believe in Anakin’s fall the way it’s been portrayed. So I maintain that true love remains much more ‘good’ than the Jedi’s detachment. But perhaps that’s just me.

Might be interesting to note here that my first idea for a good Sith character was one who draws strength out of positive emotions (instead of the Sith’s seemingly pure focus on negative ones). But from BioWare’s description of the Sith classes it doesn’t seem as if they’ll really allow such an approach. But anyway.

Lastly there’s an interview over on The Holonet Project with Web Designer Alyssa Gobelle. Here’s an excerpt:

I have to say, being a fan of all things Star Wars lore I was extremely surprised, obviously in a good way, to see to what extent the Aurebesh was used within the HoloNet. Whose idea and decision was it to sneak the Aurebesh into the HoloNet?

When they first brought me on, our first major task was to design the HoloNet. We wanted the HoloNet’s voice to be as much ‘within the lore of the game’ as possible so we planned to add some generic Aurebesh to start. But we also wanted to add some hidden teases and notes for you guys to devour and ponder upon and play with. Give some more fuel to the speculation festivities.