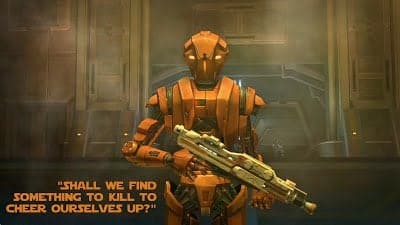 If you’re not familiar with one of the most popular Star Wars games of all time, you may not know that Knights of the Old Republic, fondly known as KOTOR, was very well-known for its voice-acting.

Here’s something you might not have known: IL HK-47 was not written to be a comedic character.

So, if you’ve played the game, you might be going “what?” right now.

Kotaku has a piece that explains how this happened. It’s from the Boss Fight Books series, written by journalist Alex Kane.

Here’s the full story on how he became a funny character:

Darragh O’Farrell was the go-to voice-over (VO) director for Star Wars video game projects, in the LucasArts era and beyond. It was O’Farrell who had the idea to do the full voice-acted recording for the whole game.

“It was one of the most ambitious projects that LucasArts or BioWare had ever attempted,” producer Mike Gallo said. “I don’t think BioWare had fully voiced anything in the same way that we were doing with this game. Certainly not that size. It was a huge budget for us, internally. It was a massive undertaking.”

They would, however, face many challenges with this project, despite the fact that it paid out royally for LucasArts. The game was non-linear and the characters could choose both light and dark sides, so scripts needed to be recorded for both. For some characters, the voice acting would not be easy, either.

One of the most contentious performances to come out of the production, oddly enough, was the beloved assassin droid HK-47, played by actor-director Kristoffer Tabori.

“Originally, [BioWare] wanted him really serious and evil and sinister,” O’Farrell recalls. “Because of our schedules, I was basically working nine to one, taking an hour, working two to six, and then at six o’clock I would do a session until ten, and I would just kind of eat, you know, while we were working. And Kris was one of those evening sessions.”

In the script, the character wasn’t played for laughs. A droid with a lust for violence, HK introduces almost every new line of dialogue with a tag denoting the mode of speech. (“Expletive: damnit, master, I am an assassination droid—not a dictionary!”) His voice is stilted, mechanical. He’s also utterly misanthropic, often referring to human beings, including the player character, as “organic meatbags.”

Tabori tried performing the part as written, but something was missing.

“After about twenty minutes we both, almost simultaneously, said, ‘You know, I’m just not feeling this. This isn’t quite working. I think we’ve got to play up the comedy angle,’” O’Farrell says. “And so we played around for five minutes with it, trying to sort of find the voice, and then decided, ‘Okay, we’ve settled on something.’ And we went back to the beginning of the script and recorded everything again, working our way through all of the HK-47 stuff.”

This is when he decided to bring some humor to the character instead. It was a risk.

But O’Farrell stuck to his guns that something was off with the original writing of the character and since they were on a timeline for the entire project, he wanted to move ahead with the new version and see what happens. By the end?

And that’s how they pulled off an unexpected voice-acting win!