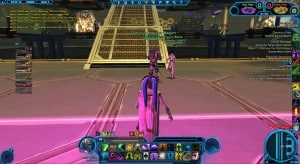 Have you ever wondered just how many players are playing warzones? I’m in a PvP guild on a PvP server and pretty much all of us do warzones on a daily basis. I typically do not have to wait too long to get into a warzone but I have noticed a trend that I start to see the same people over and over again. You start to learn who people are and discover their personalities. You spot the full-time PvPers fairly quickly.

Erickson said in an interview with GamerZines:

“It’s not actually giving players something additional to do, I mean it does that, but it isn’t the motivation,” he explained.

“What happened was that we also brought in the guys that had worked on PvP for Warhammer Online. Those guys came over from Mythic and built our PvP and our Warzones, which turned out to be wildly popular. Over 50% of our players play Warzones on a daily basis which is astronomical for an MMO community.”

Once you launch a game it becomes the community’s game, if your community says, “Great job on the story – we love it, but we want more PvP,” then we say, “Great more PvP features it is!”

With ranked warzones on the way and other tweaks being made to improve warzones and PvP in general, I think we can easily predict that number to rise above 50% in the near future. The fact of the matter is that while not everyone thinks of PvP when they think of SWTOR, there is still a great enough interest in the PvP aspects of the game to make it worth expanding and improving the content.