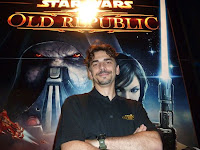 Speaking at the Vancouver Game Design Expo, the Associate Lead Designer of SWTOR Emmanuel Lusinchi had some interesting things to say about the development of the game. He described his experiences summarized from six years of development on Electronic Arts’ high-profile MMO, what many consider to be the most expensive MMO to date.

Lusinchi started his insightful and entertaining lecture off with the advice “You are not working enough on your development tools”. He emphasized the return on investment for tool optimization because of the development time-savings, especially in the MMO genre, where content creation continues long after the game launch

The more I hear from this guy, the more I’m starting to like him. He went on to cover lessons two and three of communicating with the fan base: “Everything you say can – and will be – used against you”
Yup, sounds like he really does know the fans. He goes on to talk about the fans can be very passionate and even irrational about things regarding the game and the story and that it’s important to handle it a certain way.

Consequently Lusinchi recommended to “wait until it’s done, tested and proven” before announcing any changes to the game and only talk about them when one is “absolutely certain how the feature is going to work”. If there is any room for ambiguity, players might end up feeling disappointed when it doesn’t meet what they had imagined.

There is no end to the wisdom and advice from Lusinchi because he even tells you how to meet new people in real life (get a dog) and he explains the SWTOR equivalent to this:

The Star Wars: The Old Republic equivalent is the different “buff” spells that all character classes can cast on themselves, but also on other players. They often result in a return buff or a “thank you”, breaking the ice and potentially leading to conversations and playing together.