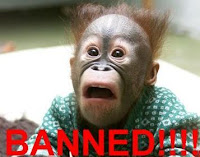 There seems to be a trend happening in the SWTOR community for the past week or two and I have to say that in all my years of gaming, I’ve never seen one quite like this before. For some reason, there is a relatively large number of players claiming to have been banned from SWTOR- some even with email “proof” – who were not actually banned at all.

Most of the reports claim to be bans over silly things that get the community and other players in an outrage because they worry whether or not it can happen to them. Accusations are flying and gamers are getting paranoid, wondering if they will really be banned for such things or if they are supporting a game company that is a little too ready with the banhammer.

But is any of it really true?

Like this from the official forums:
Originally Posted by ellywoood
I got banned yesterday on my account for ganking this group of lowbies and t bagging them. I am on a pvp server and they said it was harassment, but back in rift I did this thing all the time. I mean it’s a pvp server it’s what I do also. I love this game but I have never been treated this way before by any company I blame EA.
I just confirmed with our Terms of Service department: you have never been banned.

Please be reminded that this type of discussion is not tolerated in these forums. And for those of you reading this, please be wary of posts from people that claim that they have been actioned upon.

Joveth Gonzalez | Associate Online Community Manager
Sure, it’s not only possible but probable that there have been some accidental bans or bans for misunderstandings and it’s probably also likely that when given the opportunity, BioWare would rectify the situation. Remember the story we brought you of the guy who was autobanned for “spamming” when he was just talking about spammers in chat?
However, it doesn’t seem likely that there are widescale bannings taking place for ridiculous reasons. Instead, it looks more like someone (or someones) has a vendetta out on BioWare to try to make people think they are doing these unreasonable bans.
So what do you think- what is the deal with the false ban reports? Trolls? WoW fanboys? Disgruntled gamers?