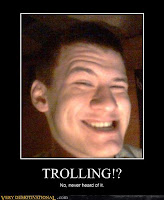 You just cannot have a game as big as SWTOR without having some trolls here and there. If you’re in any in-game chat channels, you’ve probably encountered a couple or more at this point. You’ve probably also seen them on the forums. We also have them on fan sites and well, basically anywhere in the SWTOR community. However, there is a trend going on in the official forums that is starting to grow very annoying for many people.

At risk of sounding a bit conspiracy-theorist-ish, there seems to be a trend of making BioWare look bad going on. While I’m not quite sure what the intention behind it is, I am definitely not the first person to notice it. My own friends have brought it up and there are multiple forum threads and also posts on Reddit about the topic.

First is the issue of people claiming they have been banned when Reid and other BioWare staff members come in to say that the player was not actually banned at all. Here’s an example:

Originally Posted by notafanboy
No I’ve been banned on my account for buying and reselling items on the galactic trade market as Bioware says it.
You have not been banned. In fact, your account has no notes on it at all from the Terms of Service team – and nor does your ‘alt’ account under the same name and address.

If you have a third alt with a different username, feel free to PM me directly with it and I’ll investigate that too. The email image you linked to may not have been created by you, but it is a fake.

If you have any issues with accessing the game, please contact Customer Service.

For the record, ‘playing’ the Galactic Trade Network is part of everyday, normal gameplay and is expected to happen in Star Wars: The Old Republic. No-one has been banned for their actions on the GTN.

As a general note, I would advise caution before assuming someone who is posting that they are ‘banned’ is actually banned.

Stephen Reid | Senior Online Community Manager
Then another issue are the complaints about bugs that are not there, complaints about gaming in SWTOR and moderation, and much more. In general, it looks like there are efforts being made to make BioWare/SWTOR look bad.
What do you think- time to pull out the tin foil hats? Either way, it’s getting a bit annoying to a lot of people.

Here is a few other articles about the banning issue:
BioWare Banning for Using Profanity in SWTOR?
False Bans Reported in SWTOR Community