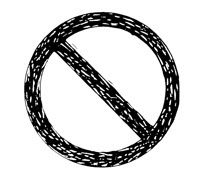 Once we got over the giggles, we wanted to see who it was. Who wouldn’t be interested in the details of the first guild blacklisted from SWTOR?

The speculation about who they were and what they did was hilarious (TP’d Bass’ house, naming violations, etc) but the real reason was likely less interesting.

There was almost instantly a thread about it on the forums but of course, Bass himself wasn’t going to provide details via Twitter (saying only “they know who they are”) so we had to do some digging.

Seeing as how the “you jelly” submission is gone from my r/swtor front page, we guessed it was that guild and a Reddit post called “don’t be jelly” posted a screenshot of the invite email that guilds receive when they are invited to the Guild Testing Program. 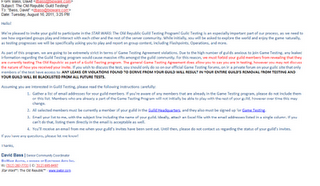 This leads us to believe that they were probably blacklisted for leaking information. Personally, I don’t recall ever hearing of an entire guild getting blacklisted before the game has even launched so my guess is that it probably was for leaks.

Then again, David Bass tweeted and posted on the forums “don’t ask for guild beta invites” so it is possible that this guild was begging for beta invites but while I see that as being annoying, I’m not certain that would actually warrant a complete blacklist of the entire guild. So my guess is that it was the former- someone in the beta program who leaked info.

So I did some more digging…

Other Twitter posts that followed Bass’ original tweet of the blacklist indicated the guild was caught streaming beta gameplay (really?). An NDA is a legal, binding agreement. It could be in the best interest of BioWare to allow a little leak here and there (and I think they definitely do) but live streaming of private, restricted access gameplay is a completely different story.

Most agree that this blacklisting shows that BioWare is taking their rules seriously and expect others to do the same. What do you think?

For the blacklisted guild, one forum member had this to offer: