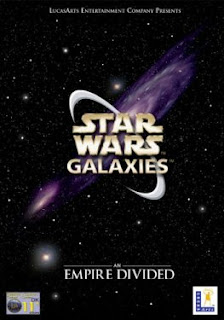 Star Wars Galaxies
MMORPG
26 June 2003 – 15 December 2011
After more than eight long years (live playtime), it’s time to say goodbye to Star Wars Galaxies. The MMORPG from a galaxy far, far away is officially dead. But it wouldn’t go out without one last big bang from Sony Online Entertainment (SOE).

SWG held a series of farewell events to help say goodbye to the MMO once and for all. While it seems it is being forced into an early grave by bigger and better things (SWTOR anyone?) this does not mean that SWG will go quietly into that dark night.

Let’s take a look back on SWG, according to Wikipedia:

“Star Wars Galaxies (abbv. SWG) was a Star Wars themed MMORPG for Microsoft Windows developed by Sony Online Entertainment and published by LucasArts. Its servers shut down on December 15, 2011.”

And more facts:
Throughout those years, millions would play the game. Some would abandon it for other games or to quit games altogether. Still others would remain with SWG until the very end, loyal like a best friend. All of those who played have their own memories of the game and what it meant to them.
What are your best memories of Star Wars Galaxies?