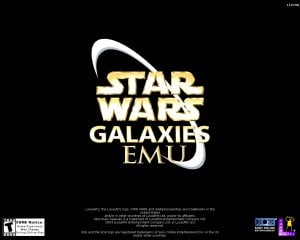 One day, James Currie, wrote a story on his blog, destructoid.com, about crafting and he used Star Wars: Galaxies as an example. He then realized that the old Star Wars MMO had an emulator and he had to give it a whirl right then.

Depending on your age you may or may not remember that before microtransactions came to be, there was pre-NGE Star Wars Galaxies and players played roles like smugglers, bounty hunters and gunslingers. However, Sony purchased the game and then introduced Jedi with the ‘New Game Enhancements.’ Many players hated the new update and the Star Wars community was in a rage. After several years of no improvement, SWG shut down but the emulators rose up. Because NGE dropped the SWG, the emulator project grew. It was a huge hit and he has been playing it ever since.

The one thing that is captivating, according to Currie, was that every NPC that wonders about Mos Eisley has a routine, just like a player. “The NPC’s act like players, and so the players act like NPCs. Players wear stormtrooper armour and walk in patrol alongside NPCs, shooting womp rats as they stray too close to the city. Two mercenaries, a gunslinger and a smuggler, relax over drinks at a table outside the starport. Not players, but NPCs. As I wondered into the cantina I saw the same, but this time there were players sitting with them, enjoying the atmosphere as NPCs and players alike played music and danced for our entertainment. I felt genuinely guilty as I broke the scene to ask how to activate the antialiasing. Hint: Nvidia Control Panel.”

However, there were a few problems no matter how many memories the scenes brought back. SWG is from the year 2003 and WSAD was not how the character moved around, arrow keys was in charge of this role. He then traveled out of the city to kill some womp rats, but he was killed by 5 rock beetles. The problem was that they ran at him and killed him before they went back to their original position and the attack animations were never triggered.

The missions were a plenty and they all varied greatly. However, the newer combat oriented characters have to finish certain quests until they are able to get the skills or take up a career in one of the many different paths available before NGE ruined them. So, to get to the top, he had to start from the bottom and work his way up.